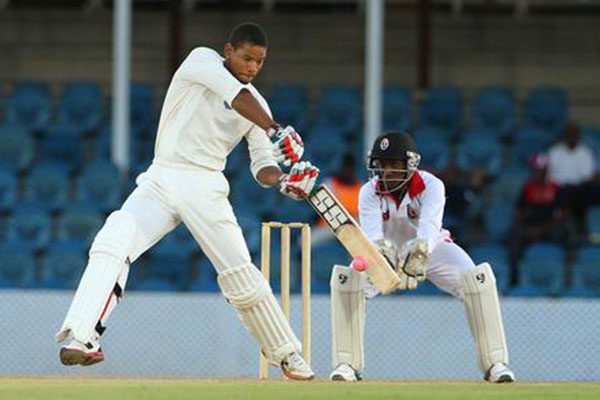 Port of Spain, Trinidad — Leeward Islands skipper, Kieran Powell, and their wicket-keeper, Jahmar Hamilton, fought back for the visitors on Day 3 to ensure a slide did not continue against hosts, Trinidad & Tobago.

Resuming on 86/9, the Leewards added 27 runs in quick time as they only faced 25 balls before being bowled out. Hamilton continued his stroke play on the third afternoon while last man Anthony Martin also chipped in with two boundaries. But T&T held the upper hand, gaining a first innings advantage of 345 runs.

Without hesitation, skipper Rayad Emrit, enforced the follow-on, asking the Leeward Islands to bat again, and things weren’t much different the second time around either. With just five runs on the board, Lyndel Richardson drove straight to Emrit at cover, and Shannon Gabriel had given T&T the early wicket.

Mali Richards and Powell then sought to get the Leewards back on track and stop the early rocking. They put on 38 runs together before Imran Khan had Richards caught at slip by Darren Bravo. Sylvester Joseph once again struggled.

He hit two good looking boundaries but they were bad balls. By this time, T&T were putting the batting pair under pressure. They stemmed the flow of runs as they closed in an built pressure. Joseph seemed to fall to the pressure.

He tried taking on Khan, only to heave an expansive drive to substitute Marlon Richards at cover. He wouldn’t be the only one to give his wicket away. Devon Thomas, who followed him, looked in good nick. The pressure was on at 60/3, but he needlessly ran himself out when on 14. He hit the ball straight to Marlon Richards and took off for a quick single. Powell, at the non-striker’s end, never moved.

The Leewards were once again in serious trouble. Hamilton joined Powell, but this time he wasn’t batting with the lower order, he was batting with an opening batsman. Both batsmen rescued the Leewards from a pending collapse.

They put on 59 runs together. They batted patiently and solidly. Hamilton got to 23 runs from 98 balls before he was trapped Leg Before Wicket by Khan. T&T’s frustration had ended. He had hit three boundaries.

Powell continued on solidly. He had past his 50 and kept going for his team. There was late drama in the day though. In the last over, with two balls to go, Gabriel produced a ball that surprised Powell, took his edge and Katwaroo completed the catch. He was out for 67.

The Leewards at Stumps on Day 3 were 159/6, still needing 186 runs to make T&T bat a second time. The fourth and final day starts at 3pm Eastern Caribbean Time tomorrow.