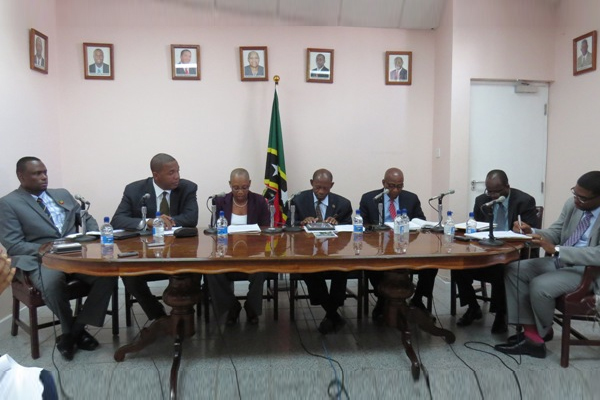 Powerful evidence that St. Kitts and Nevis is on the right track

Basseterre, St. Kitts (CUOPM) – St. Kitts and Nevis’ Prime Minister the Right Hon. Dr. Denzil L. Douglas has hailed the unrelenting efforts of his Cabinet to protect the twin-island Federation from the severe upheaval that has befallen so many across the globe.

In an opening statement at the first Cabinet Press Conference for the year, Dr. Douglas, who is also the Minister of Finance made reference to what he said is the considerable economic trauma being experienced within the Caribbean at the moment.

“There is no need to get into the details, but we are all aware of the massive layoffs, the salary disruptions, and the other forms of societal distress with which some of our Caribbean neighbours are grappling. In addition, it is sobering to contemplate the reality of the European Union, home to many of the world’s most powerful nations, despite its best efforts, having produced zero economic growth in 2013. You may remember that our policies here in the Federation produced a growth rate of 1.7% during the same period,” said Dr. Douglas, flanked by his Cabinet colleagues.

Dr. Douglas noted that sensing the economic meltdown that was about to spread across the globe, he and his financial team years ago, dedicated themselves completely to planning, revising, refining, perfecting and then revising and perfecting again, a pre-emptive, protective, and entirely home-grown strategy to ensure that St. Kitts and Nevis would not be crushed by the global crisis.

“We set out, despite the doubts of many at home and abroad, to put in place a meticulously developed financial policy designed to enable St. Kitts and Nevis to meet our debt obligations; pay our civil servants on time; fund skills-training and apprenticeship programmes; fund and train aspiring entrepreneurs; expand our unrivalled land and housing programme; attract and retain massive local and foreign investment and much more – all in the midst of a world-wide recession,” he told the media and the nation.

Prime Minister Douglas refereed to several ongoing construction projects including Ross University expansion, Golden Rock Commercial Park, Koi Resorts, and many others that are of significant benefit of workers, large corporations, service providers, and others throughout St. Kitts and Nevis.

He pointed out that some describe the Washington-based International Monetary Fund as a harsh judge of economic performance, quickly pointing out that the Fund does, indeed, have extremely strict performance criteria.

“They therefore challenged, from every possible angle, the financial strategy that my Ministry of Finance had – on our own – developed, in an attempt to ensure that it would work. And it did – with the IMF now publicly and repeatedly praising the effectiveness of our policies,” said Prime Minister Douglas, further stating: “Were St. Kitts and Nevis failing or faltering, the IMF would say so. And those who oppose my Government would be quoting the IMF loudly and long.”

“The reality is, however, that the performance of St. Kitts and Nevis under the leadership of this Federal Cabinet, has been described by the IMF and its representatives as ‘very good,’ ‘strong,’ ‘outstanding.’ And reasonable people think that this is a good thing,” Prime Minister Douglas said during the press conference in the Parliamentary Lounge at Government Headquarters.

“Debt is down. Crime is down. Investment is up. Civil service salaries are up. And the IMF has projected growth of between 2.5 percent and 3 percent for St. Kitts and Nevis in 2014, said Prime Minister Douglas.

“Permit me to place this projection in context: In 2013, the St. Kitts and Nevis economy grew by 1.7 percent and the economy of the United States – the most powerful nation on earth – by 1.9 percent. The IMF expects the US economy to grow 2.8 percent in 2014, and the St. Kitts and Nevis economy to grow between 2.5 and 3 percent,” said Prime Minister Douglas.

This he said is “powerful evidence that we, in St. Kitts and Nevis, are on the right track.”

Dr. Douglas noted that United States President, the Hon. Barak Obama thinks that the current 2.8% projections for his country can make 2014 “a breakthrough year.”

“If a 2.8 percent growth rate would be so phenomenal for the world’s leading superpower, the 2.5 to 3 percent projected growth for St. Kitts and Nevis should speak powerfully to Kittitians and Nevisians indeed,” said Prime Minister Douglas.

He publicly acknowledged and thanked the members of the Federal Cabinet – The Honourable Asim Martin, Deputy Prime Minister; The Honourable Marcella Liburd; the Honourable Glen Phillip; The Honourable Patrice Nisbett; The Honourable Jason Hamilton; The Honourable Nigel Carty; The Honourable Ricky Skerritt “for the leadership, the dedication, and the extremely hard work that enabled St. Kitts and Nevis, one of the tiniest in the world, to not only survive, but indeed to thrive, at a time when so many nations, all across the globe, are mired in despair.”

Noting that these are globally precarious times, Prime Minister Douglas said his cabinet members “have defended our nation boldly and well, and I am honoured to serve with them.”