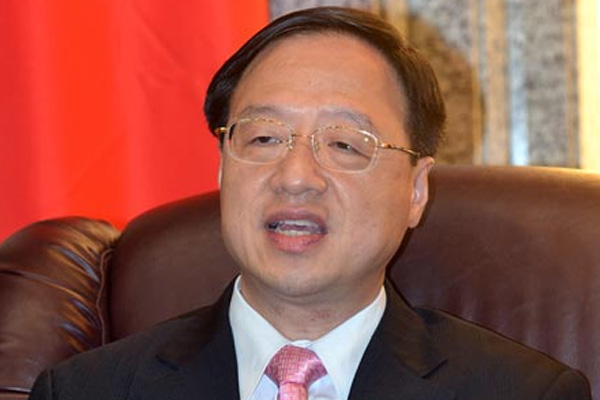 Premier Jiang Yi-huah today vowed to implement a comprehensive plan to strengthen the food safety system and rebuild Taiwan’s reputation as a nation of fine cuisine.

“The recycled waste oil incident has dealt a severe blow to Taiwan’s food industry, but we will create an ‘iron triangle’ of defense consisting of the government, the food companies and the general public,” Jiang stated at a press conference at the Executive Yuan.

The government will oversee food manufacturers, the manufacturers will control ingredients at the source, and citizens can report suspicious activities to authorities, he said.

“There will be no place in Taiwan for illegal food companies.”

The premier noted that the recycled waste oil incident was brought to light by a Pingtung County farmer who gathered evidence and reported the case to authorities. To encourage more members of the public to report illicit activities, the central government will coordinate with county and city governments nationwide to raise the reward for whistle-blowers from the current 10 percent of the company’s fines to 20 percent or more. If there is sufficient cause for indictment, the central government will pay a reward of NT$100,000 (US$3,319) to NT$2 million (US$66,373), depending on the impact of the citizen’s actions. For instance, the courageous farmer in Pingtung will soon receive NT$2 million from the central government.

The government will also enact a “conscientious employee clause,” which aims to encourage current or former employees to report their unscrupulous bosses by doubling the reward for doing so.

Furthermore, if local authorities respond slowly or fail to act on a tip, citizens may report the case directly to the central government (hotline: 02-2787-8200). The central food safety inspection and crackdown team will work with various ministries while the Ministry of Justice’s Taiwan High Prosecutors Office will join forces with local prosecutors offices to investigate the case thoroughly.

The premier stated that in the future, oils will be separately regulated in three categories: cooking oil, animal feed oil and industrial oil. Food manufacturers and processors will be prohibited from using feed or industrial oil, and violators will be subject to heavy punishments. Meanwhile, imported oil products will also be managed in the same three categories and placed under tighter regulation. Importers will be required to register and apply for import inspection.

Regarding the disposal of waste oil, the government will begin blanket inspections of night markets, business districts, restaurants, eateries and street vendors that are not currently under government watch for waste oil recycling. Small restaurants and beverage stores will be required to turn over waste cooking oil to either the Environmental Protection Administration’s (EPA) garbage recycling teams or qualified waste disposal companies in the private sector.

As for the waste cooking oil produced by larger enterprises, the EPA is considering bringing more types of enterprises under regulatory control and will announce those plans soon. The EPA will also push for legislation of a resource recycling bill to make the regulatory system more comprehensive.

Furthermore, a three-tiered inspection system for food products will be implemented:

Tier 2: Beginning January 1, 2015, all edible oil manufacturers must be accredited for food sanitation and safety by a third-party inspector.

Tier 3: The government will strengthen checks and inspections and apply the Good Hygiene Practice standards to inspect edible oil products.

The Executive Yuan said reform of the existing GMP system will begin ahead of schedule, on January 1, 2015. In addition to requiring all products of the same category from a manufacturer to be accredited individually, the new GMP system will implement source management, enhance food tracing controls, and bring Taiwan in line with international standards.

Additionally, relevant agreement-signing and official accreditation duties will be reassigned in the new GMP system. The Taiwan Food Good Manufacturing Practice Development Association will only be responsible for promoting the GMP system; the accrediting agencies (such as the Food Industry Research and Development Institute, and the China Grain Products Research and Development Institute) will be handling agreements with manufacturers; and the accreditation will be officially certified by the Ministry of Economic Affairs (MOEA).

The MOEA will increase the public’s awareness that GMP accreditation applies only to products, not to manufacturers, so that consumers and mid-stream and downstream food manufacturers will be able to make more informed choices.