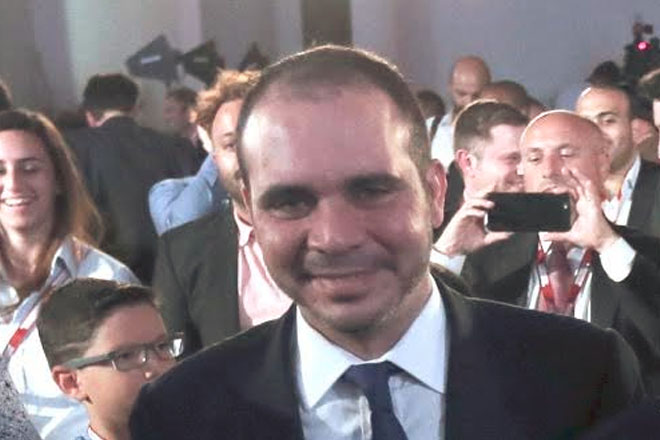 Paris, France (AFP) — Prince Ali Bin Al Hussein said on Wednesday that he thought Michel Platini, who confirmed he will run for FIFA president next year, is “not good for football and football’s fans and players deserve better”.

The Jordanian prince, who was beaten to the post at the head of world football’s governing body by long-standing chief Sepp Blatter in May, turned on the Frenchman and said Platini, who is seen as a strong candidate, is not the man to run the sport’s global affairs.

It now appears the 39-year-old, who is the third son of King Hussein of Jordan, may be plotting a fresh campaign to run against Platini and make a second bid for the high-powered post.

“Platini is not good for FIFA. Football’s fans and players deserve better,” he said in a statement.

“FIFA is engulfed in scandal. We must stop doing business as usual. The practice of back-room, under-the-table deals must end.

“I believe that the voices of the individual Football Federations must be heard. In the coming week, I will be consulting with them about what is in the best interests of football.

“What is clear is that FIFA needs new, independent leadership, untainted by the practices of the past”. added Prince Ali.

Platini confirmed he would run for the February, 2016 elections earlier on Wednesday which ended weeks of speculation over whether the 60-year-old Frenchman would stand in the election to find a successor to the beleaguered Blatter.

Ironically Platini backed Prince Ali when he ran alone against Blatter in May but pulled out after the first round of voting after he garnered 73 votes, 60 less than the Swiss.

Blatter decided to stand down shortly after being re-elected as president in June with scandal-hit FIFA’s reputation in tatters. He announced last week that the election for his successor would be held on February 26, 2016.

Platini officially announced his candidature in a letter to the presidents and general secretaries of the 209 FIFA member countries, and made public by UEFA.

“This was a very personal, carefully considered decision, one in which I weighed up the future of football alongside my own future,” he said.

“I was also guided by the esteem, support and encouragement that many of you have shown me.”

He promised to work tirelessly “in the interests of football”.

“There are times in life when you have to take your destiny into your own hands,” he said.

“I am at one of those decisive moments, at a juncture in my life and in events that are shaping the future of FIFA.”

He added: “During this last half-century or so, FIFA has only had two presidents. This extreme stability is something of a paradox in a world that has experienced radical upheavals and in a sport that has undergone considerable economic change.

“However, recent events force the supreme governing body of world football to turn over a new leaf and rethink its governance.”

The former Juventus and France star also has the verbal support of four of the six confederations that make up FIFA, with the Confederation of African Football and that of Oceania the only exceptions.

Prince Ali received much of his support from UEFA members and was expected to give his backing to Platini rather than stand against him.

However after launching his attack on Platini in the wake of the Frenchman’s announcement, it may appear that Prince Ali is preparing a fresh campaign to run for football’s most powerful post.