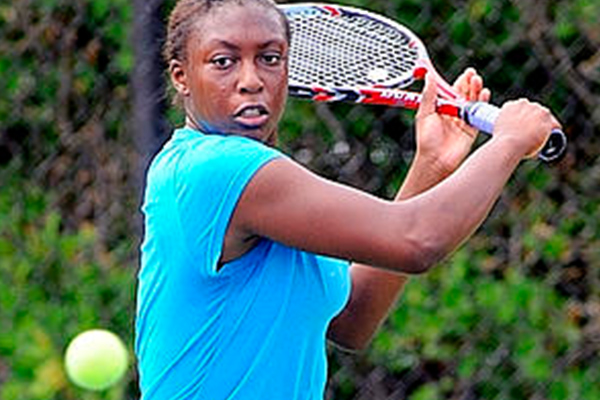 AMHERST, Mass. – Take a minute to get to know sophomore Arielle Griffin of the Umass tennis team. Griffin, a Jamaica N.Y. native and Computer Science major, recorded two singles wins in the fall 2013 season. She also tallied a doubles win alongside teammate Sonia Bokhari against Uconn (10/10).

Griffin opened her spring campaign with a singles win over Brown 6-1, 6-4 in the squad’s first dual match of 2014 (1/31). The sophomore also posted back-to-back singles and doubles wins against Bryant and Long Island last weekend. Griffin clinched both No. 1 doubles victories alongside teammate Yuliana Motyl (2/14-16).

When did you begin playing tennis?
At 9 years old.

How did you get involved in the sport?
I used to play basketball. I went to practice one day and instead there were sign-ups for a tennis program. My mom signed me up for tennis that day and I’ve been playing ever since.

Do you have any family members involved in tennis?
My mom.

What is your favorite memory attached to the sport?
At 12 and Under Team Zonals Championships. I played number 1 for my team and I won all of my singles and doubles matches at that tournament.

Who is/was your favorite coach?
Jon Taylor – my coach from 8th grade and throughout high school.

What are your hobbies outside of tennis?
Playing guitar and listening to music.

Who is your most admired person and why?
My mom because she always seems to find a way, even through extremely difficult times.

Who is your most admired athlete and why?
Kim Clijsters because she was always so gracious on and off the court.

Why did you choose the University of Massachusetts?
I liked the girls on the team and I liked the coaches and I felt like it was an all around good fit in terms of academics and athletics.

What is your typical routine on the day of a match?
Go through a checklist to make sure I have everything I need for the match in my tennis bag.

What are your goals for the season?
To have a similar record as I did my freshmen year, spring semester.

How are you preparing mentally and physically for the spring season?
Just making sure my body is as healthy as it can be to withstand all the matches we play.

Give a reflection on how you think the 2013 fall season went. What were you happy with? Are there things you hope to improve upon for the spring season?
Fall season 2013 was tough for me because I sprained my ankle and got sick with a flu-like illness. I missed a lot of tennis but I’m hoping that this semester I can stay healthy and continue to be an asset for my team.

What are your plans for after college?
To get a job in a computer-related field.