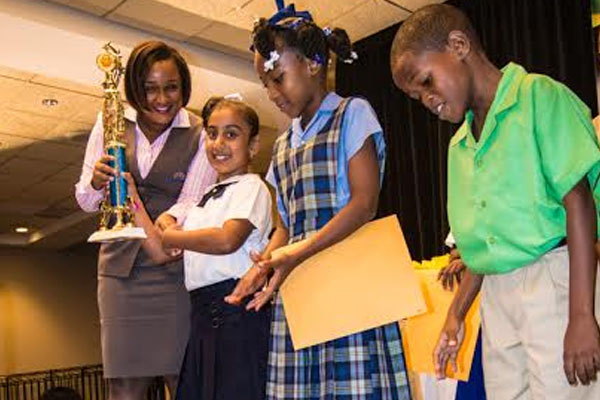 Reading is to the Mind, What Exercise is to the Body

Basseterre, St. Kitts (SKNIS) — Rebecca Chowtipersad of the Nevis Academy has been named the winner of the 6th annual OECS COURTS Local Reading Competition which was held on October 6 at the St. Kitts Marriott Resort.

One of the judges, Unoma Allen, said that it was hard to determine who would be the winner as the top six readers in the Federation gave outstanding performances.

“In the readings the mood of the story was conveyed as the story unfolded,” she stated. “The judges were really pleased to hear the emotions, the changes in the way they spoke and how they represented the characters. We also found that the students did pay attention to punctuation as there were a lot of them.”

However, Rebecca stood out from her competitors Ayazmia Dolphin of the Estridge Primary School, Jewell Debeson of the Morris Hillier Memorial School, Abigail Forbes of the Montessori Academy, Shokquan Thompson of the Tucker Clarke Primary School and Jahzara Greene of the Dieppe Bay Primary.

Ms. Allen applauded the teachers, parents and all who contributed to preparing the students for the competition.

Clarice Cotton, Chief Education Officer, stated that the competition was important to the Ministry of Education, which was also a sponsor of the event.

She noted that there are a number of reading initiatives in place at the primary schools namely the Phonics First Programme, the Jolly Phonics and Reading Recovery.

Rebecca will compete against other students of the OECS countries in Grenada during the regional leg of the competition.