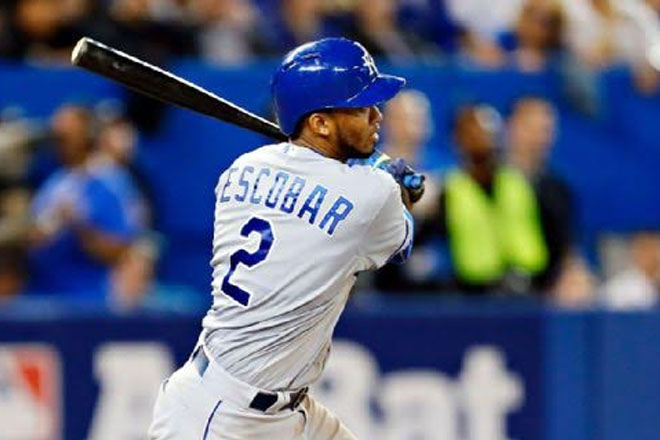 (NFL) — The Kansas City Royals, not the Toronto Blue Jays, have boomed their way through the American League Championship Series, and sit one game away from the World Series.

With 14 more runs in Tuesday’s Game 4 victory, the Royals have 33 total runs, tied for the second-most ever through four games of an ALCS. And their 12-run margin of victory in Game 4, a 14-2 rout of the Blue Jays, has been bested by only three other road teams in playoff history.

There are plenty of other offensive achievements the Royals are working on. They are now the fifth team in postseason history with 15 or more hits in back-to-back games, and they now have six consecutive postseason games with at least five runs, one shy of the longest single-season streak in postseason history.

Add in the fact that the club’s bullpen has been extremely effective and the defense has been as good as advertised, and the Royals are sitting in a comfort zone heading into Game 5 at Toronto on Wednesday.

And, not that the Royals are thinking about this, but they also have the advantage of playing Games 6 and 7, if necessary, at home.

WHO’S UP: Edinson Volquez gets the start in Game 5 for the Royals, his first chance to follow up on his Game 1 success, when he delivered six scoreless innings in the team’s 5-0 shutout. It is one thing to hold down the Blue Jays’ offense in spacious Kauffman Stadium, but now he must do it at Rogers Centre, where the dimensions are far tighter and the ball cuts through the air easier.

WHO’S HOT: Alcides Escobar is the leading candidate for MVP honors in the ALCS with his .600 batting average and 1.446 OPS. Talk about leading the charge: Escobar has a hit in his first at-bat of the game in each of the four ALCS games so far, collecting a double, single, triple and bunt single, in that order. A leadoff man who isn’t known for his on-base percentage, he has scored six runs and has five RBIs in the four games of the series.

WHO’S NOT: Every Royals starter has at least a .300 batting average in the series except for Mike Moustakas and Salvador Perez. The Royals are far from worried about them, though, as both have made their presence felt on the defensive side, and both are significant leaders in the clubhouse. Moustakas is 3-for-17 in the series after going 2-for-18 in the division series. Perez is 2-for-15 in the ALCS.

WHAT’S AHEAD: Sorry, Royals fans, your team would just as soon clinch the series out of the country rather than take it to a sixth game at home. Nothing like a little rest before heading into the World Series! A clincher on the road, though, would be the first in two years for the Royals, who finished off the wild-card game, the ALDS and ALCS at home last year, and then wrapped up the ALDS at home this year.