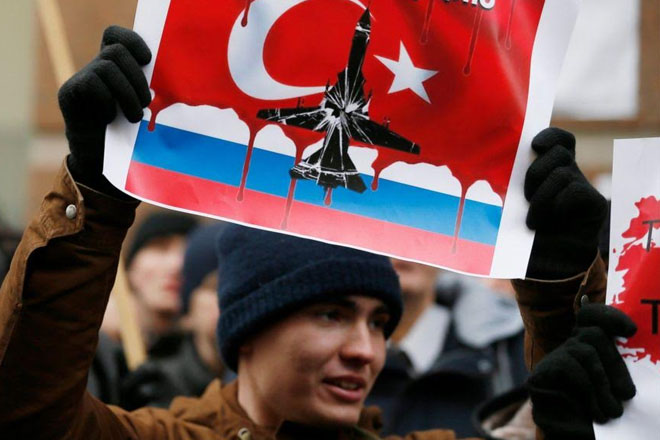 (BBC) Russia is preparing wide-ranging economic sanctions against Turkey after Turkey downed one of its military jets on the border with Syria.

Prime Minister Dmitry Medvedev said the measures would be drafted within days, and could hit joint investment plans.

Also on Thursday, Russia’s military suspended all communication channels with the Turkish military, including a “hot line” to help avoid air accidents.

Russia has sent troops and aircraft to Syria to back up the Syrian government of Bashar al-Assad in the civil war.

Tensions between Turkey and Russia have risen sharply. The US, the EU and the UN have appealed for calm.

Meanwhile, Russian President Vladimir Putin met his French counterpartFrancois Hollande on Thursday and pledged Russia’s support for a grand coalition in the fight against the so-called Islamic State (IS) militant group.

IS controls large swathes of Syria and Iraq and claimed the attacks in Paris earlier this month.