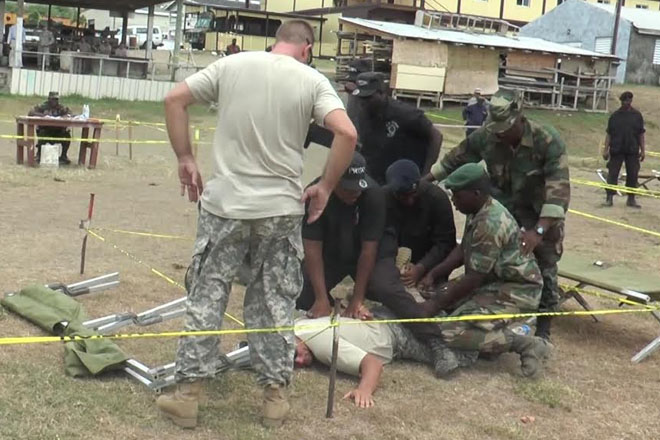 (ZIZ News) – The soldiers of the St. Kitts and Nevis Defence Force were put through their paces on Thursday to test what they have learnt during a two-week Military Training Exercise.

On Thursday morning, the training field at Camp Springfield was transformed into a mock detention holding area, the site of a simulation exercise for the soldiers.

It was the culminating training event for the soldiers, wrapping up two weeks of training by with the Florida Military Police.

First Lieutenant Alexander Ham, Operations Officer in the 806 Military Police Company said the goal was to see how the local soldiers would put their new skills into action.

“Basically, we’re running a mock facility, a mock detention holding area. It’s a short-term facility that we utilize for combat operations, or another example would be if a natural disaster hit and the prison was damaged. It would be a temporary facility for those prisoners,” First Lieutenant Ham explained.

He said the mock detention holding area is ideal for testing as it would replicate what would happen in real life situations.

He also commended the local soldiers on their performance during the training.

“Everybody that’s out here has showed up to train and learn. We’ve gained a lot of experience from them and I’ve noticed a lot of interaction during training and outside of training between our two organizations,” he said.

Public Relations Officer for the St. Kitts-Nevis Defence Force, Captain Kayode Sutton said the training they have received can be put to use in a variety of situations, such as ensuring security following a hurricane.

“Having this training at this time…I can say it’s timely enough. We have it now and if a situation should arise nationally during the storm, we don’t envisage that there’ll be anything like that, but we have the capacity development to perform efficiently,” Captain Sutton noted.

Officials say establishing best practices is necessary to ensure that there are no injuries to the soldiers or the detainees.