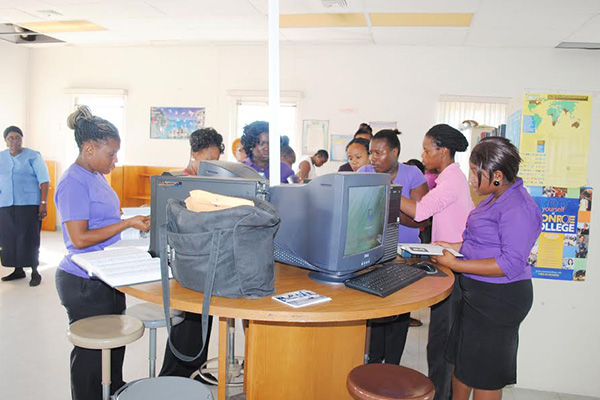 Basseterre, St. Kitts — People Employment Programme’s Early Childhood Facilitator Mrs Vanta Walters did what every seasoned educator would do, when she recently partnered with the Charles E. Halbert Public Library in Basseterre in order to educationally advance the 26 trainees under her tutelage.

According to Mrs Walters, one of the modules that she has to teach them as a part of the Early Childhood course is called Apply Basic Communication Skills, and the library was the best place for them to learn the topic in a more practical way.

Mrs Walters chose to take them to the library because one of the things that they have to do, as part of the elements of competence, is to be able to access information from the different information systems, and the library is the ultimate place.

The trainees had six lessons at the library where Chief Librarian, Ms Carroline Henry, took a personal charge of them. From what they learnt, Mrs Walters said that they were able to do research on three early childhood pioneers and in so doing they were able to put the skills they had learnt in getting the information into practice.

“I was very glad that I chose to attack that aspect of the course from the angle that I am doing it because I was surprised to learn that most of them have never been to a library, and most did not even know where the St. Kitts Library was located,” remarked Mrs Walters.

At the library, Ms Henry taught them about the library, how it is organised, its functions, what is done and some information on literacy. She noted that she discussed with them the types of libraries; public, academic, the schools and the special. She also touched on the resources one would generally find in all libraries, which are the books, the computers, and for public libraries the government documents. She also showed them how to use catalogues, the dictionary, and the encyclopaedias.

“They did fairy well because I told them when I give exercises I do not expect them to just sit down and not do it,” said Ms Henry. “What they couldn’t find they came to me and I helped them to find it, the correct volume of the encyclopaedia, help them find the correct page and they did it and Mrs Walters would check what they wrote.”

A PEP trainee, Ms Talia Pemberton, who worked as a waitress before joining PEP said that she made the move because early childhood would expand her experience, and working with the children would allow her to better understand not only the culture but her own child.

“PEP is a good programme that has helped me and it has helped others and in so doing it is building the country in the process of helping us,” said Ms Pemberton. “PEP is investing in the people. Those of us in the PEP I advise us to take it seriously as it helps improve even our language, and helps you to communicate better with other persons.”