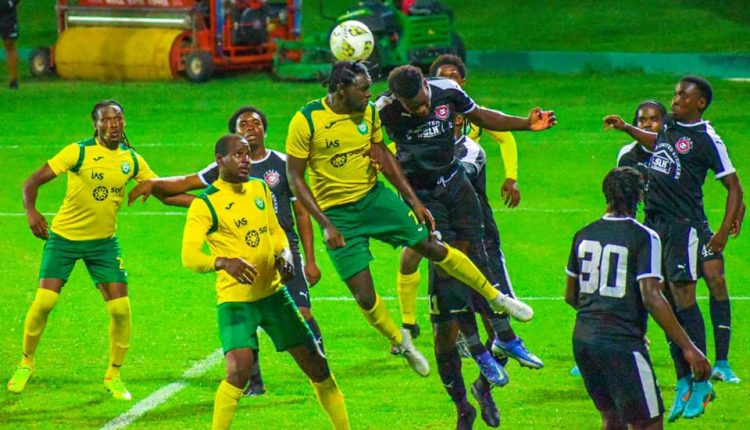 Basseterre, St. Kitts, October 20, 2022 (SKNFA) — It took a late strike from Keithroy Kiddy Freeman to give S.L Horfords St. Paul’s United FC a crucial 1-0 victory over SOL IAS Conaree FC on Saturday night in Game 1 of the best of 3 Super Six Finals series. Both teams duked it out for most of the match, unable to find that elusive goal, going into half time 0-0. But in the 81st minute, Freeman, who is without a doubt the top striker in St. Kitts Nevis football, eked out a goal from almost nothing when a cross into the 18-yard box fell neatly on his head past Conaree’s custodian Clifford Samuel; sending Warner Park into excitement. After the match, Manager of St. Paul’s Derionne Edmeade said they were happy with the win, as they had expected a competitive performance from Conaree. “We expected a competitive game and that is what we got from Conaree,” he said. “We are happy that we were able to secure that 1-0 victory tonight and we look forward to Thursday’s game where we will try to secure that championship,” Edemade added.

Conaree’s Coach Al Richards, said he didn’t think his team executed as planned. “I don’t think we executed well in attack; we had some chances we didn’t score; they came back and scored a cross late in the game. We have to go back to the drawing board and come back for game two,” Richards said.

Conaree would want to force a game three with a victory on Thursday. This team was not expected to be in the finals, but they delivered exceptional performances during the Super Six playoffs and got results to usher them into the finals. The players and coach know many see them as underdogs, but have grown stronger throughout the competition. They are confident they can pull of a game two win, as their coach Al Richards said after their match on Saturday. St. Paul’s on the other hand is looking to seal the series with a big victory on Thursday.