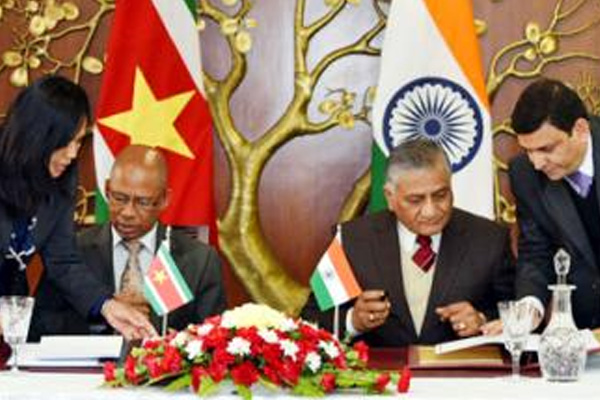 The Surinamese foreign minister is accompanied by minister of education and community development of Suriname, Ashwin Adhin, and a large delegation.

On Tuesday, the Fifth Joint Commission Meeting (JCM) between Suriname and India took place in New Delhi. The meeting was co-chaired by Dr V.K. Singh, India’s minister of state for external affairs and Lackin.

The ministers expressed confidence that the holding of the Joint Commission Meeting on a regular basis will further strengthen and deepen the existing bilateral partnership between the two countries.

Lackin also held a meeting with minister of railways, Suresh Prabhu, and Adhin made a courtesy call on minister of state for culture, Dr Mahesh Sharma.

As well, Lackin is on an important mission to India to iron out the upcoming visit of the Indian prime minister, Narendra Modi, to Suriname and President Desi Bouterse’s visit to India. All of this they hope will happen before May, when Suriname goes to the polls to elect a new leader.

Suriname-India ties are strong, especially that a large segment of Suriname’s population is of Indian origin and it’s the only country in the Americas where Hindi is spoken.