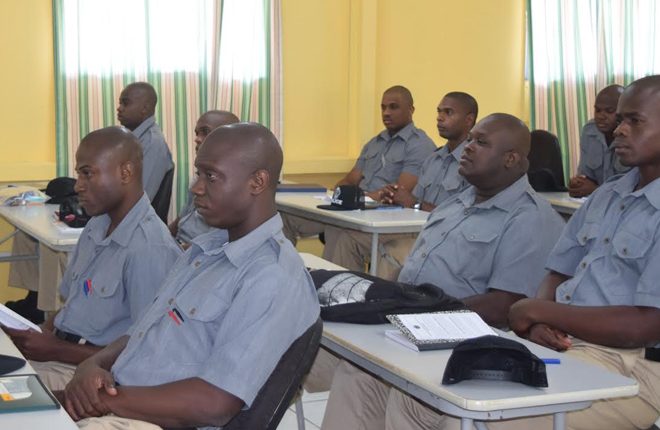 The group comprised of twenty-five (25) males and nine (9) females will spend the next twenty-six (26) weeks in the Police Training Centre undergoing the transformation from civilian to Police Constable. Guiding the process is a cadre of Training Officers who work under the guidance of the School’s Commandant, Inspector Eldrin Dickenson.

During the brief ceremony, Deputy Commissioner of Police Hilroy Brandy who heads the Service Improvement Directorate and responsible for Training, told the recruits, “remember, you are about to embark on a journey for the strong at heart, you must be resolute in what you wish to achieve on a personal level.” He also encouraged them to be the best they can be, and said, “if you can’t be a sun, then be a star, …have the determination to be the best and make a difference.”

Commissioner of Police Mr. Ian M. Queeley challenged them to maintain their integrity and reiterated that only the highest standards of service will be accepted, he told the class “we will hold you accountable”. Commissioner Queeley also thanked the recruits for answering the Nation’s call to serve, and to Serve and Protect.

The training will include lectures and practical applications on, General Duties, Criminal Law, Evidence and Procedures, Professional Development and Drills and Physical Training. Other areas to be covered will include Firearms Training and Traffic Operations. Station Visits are also conducted and provides an opportunity to see field applications of the principles taught in the classroom. An overview of the Regional Security System is also presented during the training.

Graduation is expected in the last Quarter of 2017.