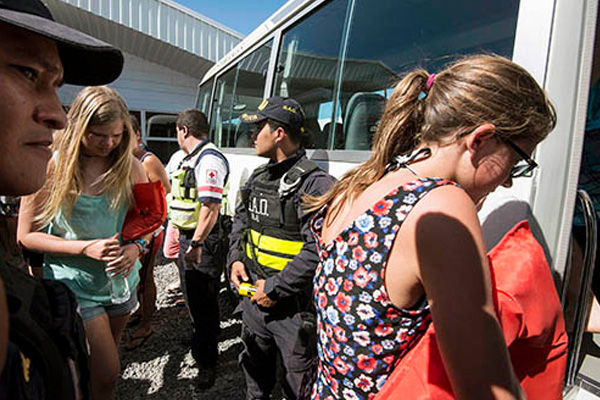 The victims were identified as a 68-year-old American woman, a Canadian woman, 70, and an 80-year-old British man, said Vice President Ana Helena Chacon, as survivors described harrowing tales of how they were tipped into the waters.

Chacon said 99 tourists and 10 crew were on the pleasure cruise when it capsized off the Pacific coast. She said 106 were rescued and nobody was missing, as previously reported.

“It’s a sad day for our country, known as a country that receives tourists,” she said.

Survivors told local media the catamaran capsized due to powerful winds and that the ship rapidly sank.

Stella Hopkins, an Argentine and the wife of the British victim, said she had thought that the boat would turn around because the sea was choppy, but the crew decided to continue the cruise.

“They didn’t give us life jackets until the boat was about to sink,” she said.

Hopkins lost sight of her husband until she was taken to a boat, where his lifeless body was lying.

The catamaran had sailed from Los Suenos on the Pacific coast and was heading to Tortuga (Turtle) Island when the shipwreck happened some 15 kilometres (nine miles) offshore.

“The wind tipped the boat and water began to come in. People moved to the other side to balance the weight, but it didn’t work and the boat sank in minutes,” said US tourist Arcelio Garcia.

Another woman described the “horrible experience.”

“We were floating in the ocean. Many people were crying, screaming, asking for help,” the unidentified woman told local television.

The transport ministry said the catamaran, owned by the company Pura Vida Princess, was a 2007 model and authorized to carry 120 passengers and 10 crew members.

The ship appeared to have enough lifeboats and life jackets, according to the ministry statement.

Costa Rica has been hit by powerful winds that have produced huge waves, while tearing down trees and billboards inland.