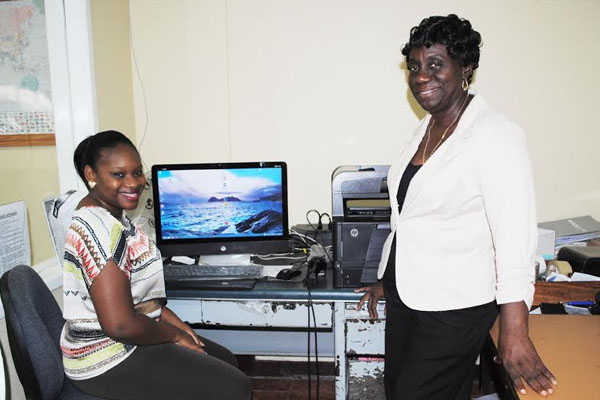 To say I am happy because of PEP is an understatement, says participant

Basseterre, St. Kitts — Ms Zemone Phillip of LaGuerite Village in Basseterre, a People Employment Programme (PEP) participant working at the General Post Office, has been singled out for her excellent performance with the computer even though she knew very little about computers before she took up the position last year March.

Currently working at the Express Mail Service Department, Ms Phillip was seconded to the Post Office under the Engaging Qualified Interns Project (EQUIP) component of PEP. She uses a computer that was donated by the People Employment Programme to the Post Office.

“I never did computer classes in high school,” commented Ms Phillip. “However when I was going in primary school we did a bit of computer classes, then I just sort of started to tamper and that is where I found the knowledge of computers…

“But to me it is just common sense and you just go … I mean, a machine does not do something which you do not tell it to do. In all, what we put in is what we will get out, so that is how I see machines and computers. What we type in is what we get out.”

She attended the Washington Archibald High School, having transferred from the Dr William Connor Primary School, and then joined the Clarence Fitzroy Bryant College (CFBC) to study economics, but left after one year to seek employment as a Customer Service Representative at one of the hotels.

When PEP was launched Ms Phillip felt that it offered opportunity for better alternatives that would give her training and upward mobility. She thanks the SIDF for having provided the funds to set up PEP, and assisting many young people in the Federation.

Since she joined the Post Office, Zemone has worked in different areas having started at the Stamp Room, had a stint as the secretary to the Post Master General, and is now a permanent feature at the Express Mail Service Department.

“I have been given the chance at the Post Office to master how to use the computer and I have vowed not to let them down,” said Ms Phillip. “Earlier on I had wanted to study psychology, but since I came here at Express Mail Service I have fallen in love with the mail.”

Asked if she was happy with what she was doing, and with PEP for enabling her to have that opportunity, her replay was: “Let’s not use the word ‘happy’, that is an understatement. Let’s use ‘overwhelmed’.

“PEP sent me to the right place. PEP is a very good programme for school leavers, and the unemployed, as it gives them the urge to enhance their skills. As for me, I never knew about the Post Office and what goes on inside, but now I am in here I have learnt a lot, just because of PEP. It helps people to better their skills and it also helps in economic growth as well.”

Post Master General, Ms Sandra Davoren, says that since Zemone came to the Post Office as a PEP worker she has exhibited quite a lot of potential, having worked in various areas, Express Mail, Mail Operations, Despatch, and also worked as her secretary.

“She is a very versatile young woman and she is someone, once she is afforded the opportunity she runs with it,” said Ms Davoren. “She is very open to any training that she would receive. She is open to discussion, and collaboration as to how she can do better. She understands the mission and vision of the Post Office.”

Since joining the Post Office, Zemone has benefitted from international training even though she has not travelled outside the country for the training. According to the Post Master General, when someone from the Post Office goes out for training, such a person is treated as trainer of trainees and so when they come back they train others.

She observed that the Caribbean Postal Union recently opened a postal training facility in Barbados, which will work in tandem with the University of the West Indies, even though they have a curriculum that they will be developing specifically to help the postal sector across the Caribbean to ensure that they stay on the cutting edge of all the challenges they are facing globally as a postal sector.

“We sent two members to be trained in that facility last month and we are hoping to have another training which is geared at sustainability and so when they come back, they will train and they will disseminate the information, pass it down to others,” explained Ms Davoren.

As for Ms Zemone Phillip, the Post Master General said that the promising worker she, a recommendation had been forwarded to the Ministry to have her employed as a fulltime worker at the Post Office.

“I can see that she is enjoying her job, and as I said she understands the mission and vision of the Post Office and she does everything to ensure that the Post Office and the work of Post Office is at an all-time high,” said the Post Master General. “She is very, very good. She is, here for us because of PEP – PEP is a blessing.”