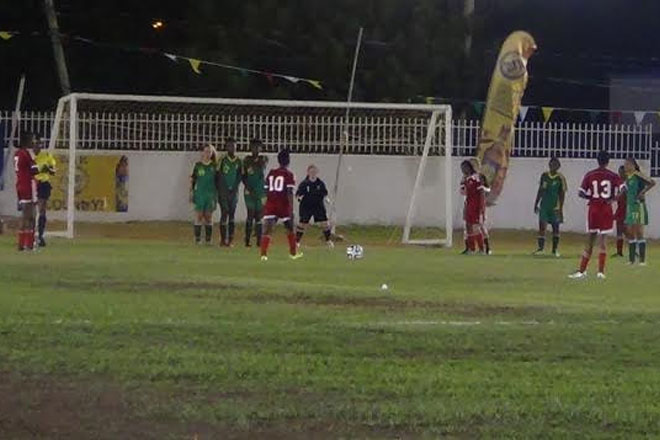 Charlestown Nevis — After much hype and promotions and after hours of sacrificial work by the local organizing committee and support stakeholders, the FIFA group three women’s Under 17 Women’s Football World Cup Qualifiers got on the way on Saturday 22nd August.

The action commenced promptly at 5.30 pm at the Elquemedo Tonito Willet Park in Charlestown, in front of what could be described as a moderate crowd.

In match one, Trinidad and Tobago engaged a determined Dominica team and both teams endeared themselves to the supportive crowd by demonstrating good ball skills, generally well past the first half of the game. When both teams retired to their respective benches, the scoreline was nil-all.

Early in the second half, a similar momentum ensued with both teams obviously on a mission to secure the first goal of the encounter.

However, in the 66th minute of the game, a speedy Nica Homore for Trinidad and Tobago, broke free on the left flank and slammed home a bomber which left the Dominican captain and goal keeper flat footed.

The T&T girls scored not once; not twice but three more times before the final whistle, without a whisper from the Dominicans.

The last three goals were scored from the boots of Raenah Campbell; Ranae Ward and Kaydeen Jack.

Surprisingly, the Trinidad and Tobago coach expressed disappointment with his team’s general performance. He pointed out that there will be changes to the starting line up in the next game.

‘If you notice, things started to happen for us, after we made some key substitutions, later in the game,’ he said. He also indicated that the Dominica team played with some heart.

By the time match two commenced, the crowd at the ETW Park had increased three fold. It appeared as if the majority of persons timed their entrance into the park, specifically for the home team’s game.

There was a bumper crowd on hand at the starting whistle. That after the impressive march on with the flags of St. Kitts-Nevis and the BVI.

Both teams marched on to the field and observed their respective national anthems and then the action began.

The mostly Nevisian crowd was obviously enthused as they witnessed their very own Melissa Clarke in the starting lineup. They were even more agitated as she made a few moves forward with the ball but just was not able to finish.

However, in the 19th minute, the partisan crowd had something to cheer about. The very agile Zynzelle Pemberton capitalized on a fumble within the area of the opposing goal and slammed the ball into the back of the net and her teammates encircled her in celebration.

She was not done yet. In the 36th minute, Zynzelle once again was in the right place at the right time, to complete an attempt from goal that was momentarily halted by the determined BVI goalie.

Make that two goals to nil.

That was the scoreline at half time and both teams grouped into huddles to take the advice of their respective coaches.

As soon as the second half started, in the 46th minute to be exact, a fast moving Shaniqua Browne of the SKN team caught the BVI defence napping and completed another beautiful goal.

With the minutes ticking away in the game, the BVI team urged on by a vociferous coach, upped their game and applied some serious pressure on the SKN defence.

In one such moment, as the SKN goalie rushed forward in an attempt to clear her goal, contact was made with the approaching striker and the referee ruled a penalty in favour of the BVI team.

This was promptly slammed into the back of the net and at the final whistle with the local team taking a lap of honour for the crowd, the score line was 3 goals to 1 in favour in their favour.

It is obvious that the huge crowd thoroughly enjoyed the standard of play that they witnessed and everyone is looking forward to the second round of matches scheduled for Monday 24th August when British Virgin Islands meets Trinidad & Tobago at 5:30pm and St Kitts and Nevis plays Dominica at 8:00pm.

However, the Football fans will be holding their breaths, as the Federation of St.Kitts and Nevis is currently under Tropical storm warning, as Tropical storm Danny is expected to make landfall in that general area within the next 48 hours.