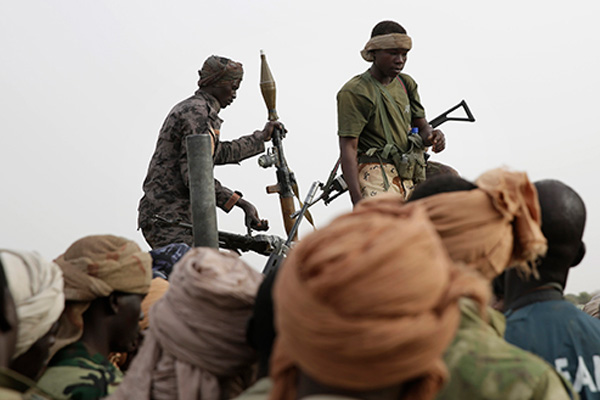 Damasak, Nigeria (AP) — Waving a captured black and white militant flag, soldiers from Niger and Chad on Wednesday celebrated their liberation of a Nigerian town from Boko Haram extremists.

It is another victory in a regional campaign to wrest back swaths of northeast Nigeria from the Islamist militants.

Damasak, just a few miles over the border from Niger, was liberated over the weekend, Col. Michel Ledru, a spokesman for Niger’s army, said Wednesday.

In heavy fighting, 228 militants were killed and one soldier from Niger died, Ledru said. Vehicles and motor cycles riddled with bullets littered the streets.

An Associated Press photographer in the northeastern town said it was largely deserted of civilians on Wednesday.

Four people, including an old man, came onto the street to wave at a convoy among 2,000 troops from Niger and Chad in the town.

There were still signs of the town’s occupation by the militants. Their writings were scrawled on every wall and the extremists’ black and white flag still flew above some buildings.

As two Chadian helicopters landed with supplies, soldiers on the ground started chanting and displaying their catch: A Boko Haram flag torn down from a nearby building.

On the outskirts of town, hundreds of troops have set up camp. Some soldiers hid from the 45-degree (113-degree Fahrenheit) heat in the shade to their tanks. Some used their helmets to grind grain for a meal. A few did laundry while others cooked food.

It was all work for a group of Chadian troops who transferred weapons captured from Boko Haram to a pickup truck that drove it to the helicopters for transport back to Niger: AK47 assault rifles and 50-caliber guns, rocket-propelled grenades and mortar shells.

The insurgents had seized Damasak with little resistance on Nov. 24, when residents reported that the militants drove in flinging firebombs and improvised explosive devices.

Thousands of residents who fled across the border into Niger said dozens of people were killed and an unknown number of girls kidnapped.

Boko Haram has been fighting a six-year insurgency to create an Islamic state and had taken control of large parts of Nigeria’s northeast in the past year. It became notorious internationally after kidnapping more than 200 schoolgirls last April.

But in recent months, Nigeria has stepped up its campaign against the militants, and, with the help of a regional force that includes Niger and Chad, has retaken dozens of towns.