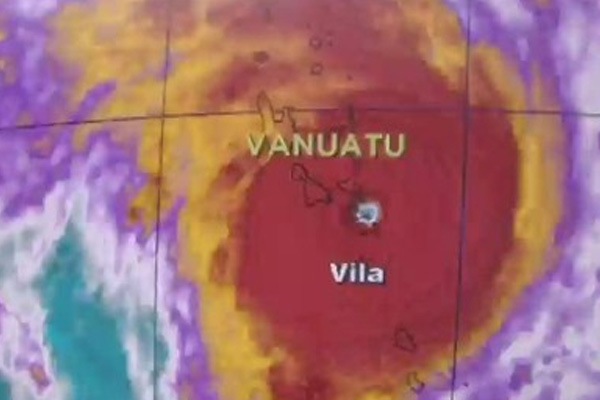 (CNN)– Tropical Cyclone Pam, one of the strongest storms seen in the South Pacific in years, has made a direct hit on the capital of Vanuatu, Port Vila.

Satellite imagery shows the eye of the massive Category 5 storm making landfall on a small island in central Vanuatu.

The capital sits on the coastline, which is vulnerable to storm surges during powerful cyclones.

Tropical Cyclone Pam is the strongest storm ever to make landfall since the devastating Super Typhoon Haiyan hit the Philippines in 2013.

Before the storm hit, the Vanuatu Meteorological Services warned of “very destructive winds and very rough to phenomenal seas with heavy swells.”

Photographer Michael McLennan — who said the storm is being called the “Vanuatu Monster” — told CNN that the “strength of winds is incredible.” He, like many others, had lost power.

Evacuation alerts have been issued for several parts of the country.

The storm is expected to intensify as it heads southward, according to the Joint Typhoon Warning Center. The cyclone has also prompted storm warnings in other island nations.

The archipelago nation of Vanuatu contains 83 small islands, many of which have little infrastructure and lack the strong housing structures that can endure a walloping storm.

Because of the tropical climate in Vanuatu, some of the housing is made of lighter building materials, including straw and corrugated metals.

“Everybody is concerned about shelter, ensuring that the shelters are going to be strong enough for them,” said Alice Clements of UNICEF, speaking from Vanuatu.

Parts of Vanuatu will likely see floods exceeding 16 inches, according to forecasts.

Residents prepared for the storm, boarding up windows and chopping down trees that stand close to buildings, in case they could become debris or cause further damage or injury.

Residents have been advised to seek shelter in places such as churches, universities and schools.

“The strongest thing they’ve got is cement churches,” said Inga Mepham, program director for CARE International for the Vanuatu program. “Some of them don’t have that. It’s hard to find a structure that you’d think would be able to withstand a Category 5 (storm).”

“The cyclone’s coming through, but then we’ve probably got 48 hours of humongous tropical storms as well, which is going to dump a lot of rain on an area that’s been hit by a cyclone that may have a lot of damage.

Cyclone Pam has triggered watches and warnings in the Solomon Islands and New Zealand.

The storm is expected to weaken after leaving the Vanuatu island chain and could affect New Zealand’s North Island by late Sunday or Monday.