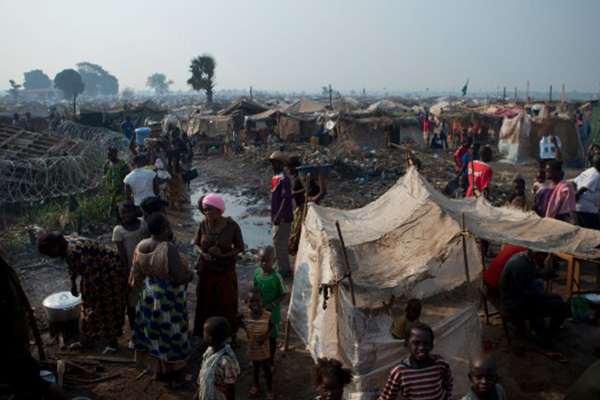 (CNN) — The United Nations’ refugee agency resumed aid deliveries to an estimated 100,000 people in the Central African Republic who’ve sought refuge at the capital’s international airport from the violence ravaging the country.

The agency, UNHCR, had halted its assistance to the refugees thronged at the airport in Bangui amid security concerns.

But the distribution of food and supplies resumed Tuesday after steps were taken to calm the situation, including the deployment of African Union and French peacekeeping troops around the airport, a news release Thursday said.

The UNHCR will now distribute aid including blankets, sleeping mats, soap, mosquito nets and plastic sheets to some 20,000 families, or about 100,000 people, it said.

“It is a relief for UNHCR and the displaced people staying at the airport site. We had to suspend distribution of aid on several occasions, and were frustrated that we could not properly assist people living on this site due to security concerns,” said Kouassi Lazare Etien, the agency’s representative in the Central African Republic.

People at the airport are “living in a desperate situation,” he added.

More than 1,000 families have been moved to another part of the airport zone, which should ease the delivery of aid, the U.N. refugee agency said.

The agency appealed Friday for $40.2 million to help it respond to the crisis in the Central African Republic over the next three months.

The money is intended to support more than 1 million people, it said, including 958,000 people who have been displaced by the fighting in the country. Many of them are children.

The latest appeal comes on the back of previous U.N. requests for funds, and reflects the worsening situation in the country, the UNHCR said.

The humanitarian group Doctors Without Borders warned Wednesday of measles outbreaks among children in several camps in Bangui.

It is now vaccinating 68,000 children in five camps in the city in order to prevent an outbreak, it said. Measles, which can be deadly to children, is highly contagious and can spread rapidly in overcrowded conditions.