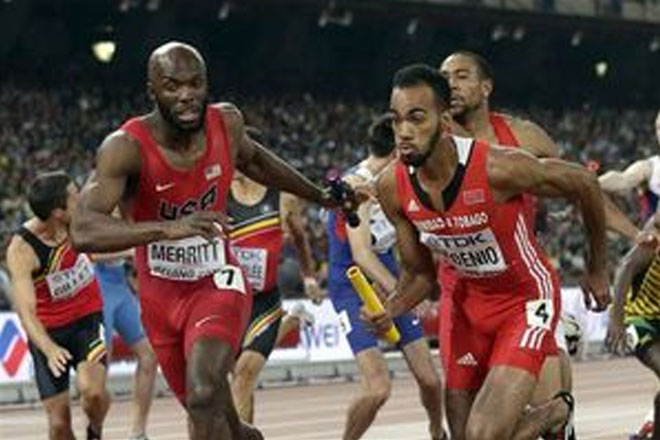 U.S. finishes behind Jamaica, Kenya in gold-medal count at worlds

Beijing — Even with its sixth straight title in the men’s 4×400-meter relay, the United States still finished behind Jamaica and Kenya with only six gold medals at this year’s world championships.

Jamaica again proved it is much more than just Usain Bolt when the country’s women’s team defeated the Americans on Sunday in the 4×400 relay to win its seventh gold medal and deny Allyson Felix a 10th world title.

“Every year they make the U.S. relay team a favorite. But now we have the A-plus game,” said Shericka Jackson, who added gold to an individual bronze in the 400.

Like the botched handoff in the men’s 4×100 relay on Saturday, the American women also lost valuable time with a hesitant handover in their duel with Jamaica.

“This one hurts more because we have such a rich legacy and history in the 4×400,” Felix said. “It’s not often that we lose it.”

In the men’s relay, Jamaica led coming into the finishing straight but LaShawn Merritt timed his lap to perfection to earn gold while Jamaica slipped out of the medals. It was the only relay victory for the U.S. team, with the other three going to the Jamaicans.

Both Kenya and Jamaica won seven gold medals during the nine-day competition, one more than the Americans.

It was the second time in a row the United States failed to win the most gold medals. It was the first time that Kenya and Jamaica were at the top.

“There were pockets of great moments and pockets where we expected to do a lot better than we did,” said Felix, already looking ahead to the Olympics in Rio de Janeiro. “The biggest thing we take away is just being hungry for next year.”

Overall, however, the United States finished with 18 medals, the most of the championships. Kenya had 16 and Jamaica had 12.

Kenya got its last gold from Asbel Kiprop, who won his third 1,500 in a row.

The Kenyan took the lead halfway through the finishing straight and the rest of the pack sprinted for silver. Another Kenyan, Eliah Manangoi, came in second and Abdalaati Iguider of Morocco got bronze.

On a big day for Ethiopia, Almaz Ayana stunned Genzebe Dibaba to win the 5,000 meters and deny her teammate a second gold medal at this year’s worlds.

Ayana went fast through the middle of the race in an effort to dull Dibaba’s finishing kick. She was so fast, though, she threw off the favorite well before the final lap and won by about 100 meters.

At the line, a disappointed Dibaba could not even hold off Senbere Teferi, another teammate. Ayana won in a championship record of 14 minutes, 26.83 seconds for a massive victory of 17.24 seconds over Teferi. Dibaba was right behind in third to complete the Ethiopian sweep.

Dibaba, already the 1,500 world champion, was seeking to win a second gold, much like her big sister Tirunesh did at the 2008 Olympics at the Bird’s Nest.

Mare Dibaba, no relation to Genzebe and Tirunesh, captured the first women’s marathon gold for Ethiopia at the world championships, holding off Helah Kiprop of Kenya in a race that was settled by a 100-meter sprint.

The 25-year-old Mare Dibaba patiently waited for the right time to make her move, constantly checking her watch before breaking away in the shadow of the stadium. Dibaba finished in 2:27:35, edging Kiprop by one second in the closest women’s marathon finish ever at the worlds.