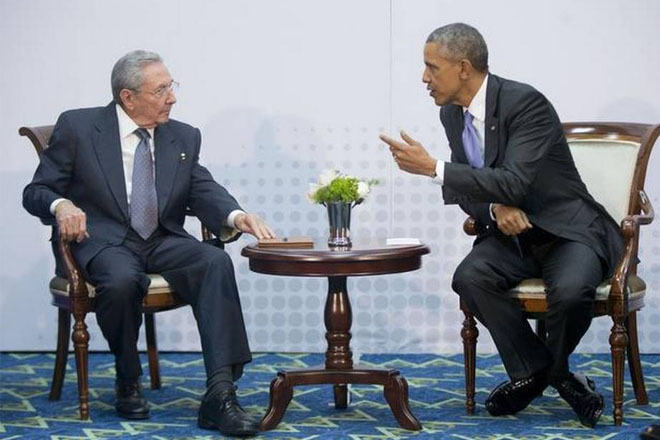 Panama City, Panama — The leaders of the United States and Cuba held their first formal meeting in more than half a century in Panama City on Saturday, as US President Barack Obama and Cuban President Raul Castro met to pursue their stated aim to restore diplomatic ties.

Obama said he wanted to “turn the page” on old divisions, although he acknowledged that significant differences between the governments would remain.

“This is obviously an historic meeting,” Obama said shortly after the two sat down. “It was my belief it was time to try something new, that it was important for us to engage more directly with the Cuban government.”

“And more importantly, with Cuban people,” the president added.

Castro told Obama he was ready to discuss sensitive issues including human rights and freedom of the press, maintaining that “everything can be on the table”.

But he also cautioned that the two countries also have “agreed to disagree”.

“We are willing to make progress in the way the president has described,” Castro said.

The historic meeting took place on the sidelines of the Summit of the Americas, which this year included Cuba for the first time.

Although the meeting wasn’t publicly announced in advance, White House aides had suggested the two leaders were looking for an opportunity to “interact” while in Panama and to discuss the ongoing efforts to open embassies in Havana and Washington, among other issues.

Earlier in the day, Obama addressed the morning session, and was followed by Castro, whose ten-minute allotted time took a total of 45 minutes.

Obama said that the nations must get rid of all disputes and added that he has asked the US Congress to lift the economic, commercial and financial embargo of Cuba.

If the US-Cuba bilateral dialogue keeps advancing, there will be progress despite deep differences, said the president, and noted that this change in US policy represents an inflection point towards the whole region, and that this change is accompanied by a compromise with the Americas.

In his speech he focused on relations between the United States and Cuba and their impact on the region, Obama made a commitment to develop new energy sources that help counter climate change, address the US migration system and solve other problems.

Castro then launched into an exhaustive history of perceived Cuban grievances against the US in his speech to fellow leaders attending the summit.

Castro, for his part, said he agreed with everything Obama had said — a stunning statement in and of itself for the Cuban leader.

“We are disposed to talk about everything — with patience,” Castro said. “Some things we will agree with, and others we won’t.”

And nothing is static, he added, noting that disagreements today could turn into areas of agreement tomorrow.

Castro also reiterated Cuba’s support of Venezuela amidst current US measures against it and called for regional unity and joint efforts to improve the wellbeing of the nations of the Americas.

“We give our solidarity to Venezuela; this sister nation constitutes no threat to the United States,” he said.