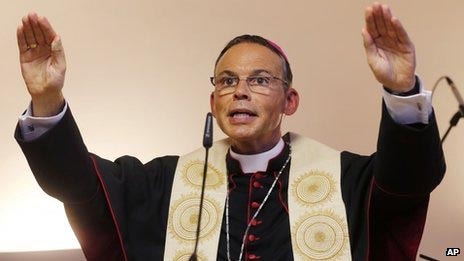 The Vatican has suspended a senior German Church leader dubbed the “bishop of bling” by the media over his alleged lavish spending.

The Vatican said it deemed “appropriate… a period of leave from the diocese” for the bishop.

The suspension comes two days after he met the Pope to discuss the matter.

“A situation has been created in which the bishop can no longer exercise his episcopal duties”, a Vatican statement said.

It said a Church commission would rule on the matter, but did not say where Bishop Tebartz-van Elst, 53, would go or what he would do while the inquiry was held.

He said: “Pope Francis’s decision offers the chance of a first step toward a new beginning in the Limburg diocese, because the situation has become an increasing burden for the faithful there, and in all of Germany, over recent weeks.”

Bishop Tebartz-van Elst – and his spending habits – had become infamous in Germany, where many people pay Church tax to the state. The tax raised 5.2bn euros for Catholics and 4.6bn euros for Protestants in 2012.

Calls were made for the bishop to resign after he was accused of lying under oath about his spending.

He was criticised for a first-class flight to India to visit the poor.

But his official residence is at the heart of the criticism, after renovations were originally costed at 5.5m euros.

German media are reporting that the residence was fitted with a bath that cost 15,000 euros, a conference table for 25,000 euros and a private chapel that cost 2.9m euros.

The story has attracted heavy coverage and has stoked controversy among Catholics.

It was in Germany that Martin Luther launched the Reformation five centuries ago in response to what he said were excesses and abuses within the Church.

The BBC’s Alan Johnston, in Rome, says all this was bound to play badly with the new Pope, who has repeatedly expressed his disapproval of senior clerics whose lifestyles seem a little too lavish.