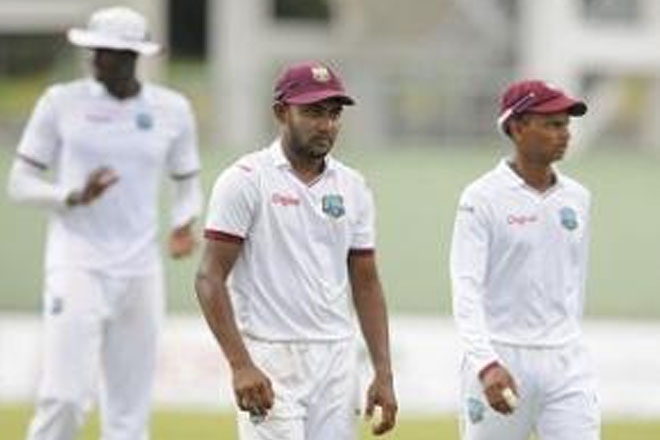 ROSEAU, Dominica (CMC) – West Indies were once again staring at a possible defeat after Adam Voges defied a career-best haul from leg-spinner Devendra Bishoo to become the 20th Australian to score a century on Test debut, and give the visitors a vice grip on the second Test here Thursday.

The 35-year-old right-hander carved out a superb, unbeaten 130 that rescued Australia from peril at 126 for six and steered them to 318 in their first innings at Windsor Park.

At the close, West Indies were already reeling in their second innings at 25 for two, losing both openers Shai Hope (2) and Kraigg Brathwaite (15), to be 145 runs adrift heading into Friday’s third day.

Bishoo, too, bowled brilliantly to finish with six for 80, and had earlier threatened to rip apart the Australia innings when he grabbed three wickets in the first session to leave the tourists floundering on 153 for six at lunch.

Unbeaten on 45 then, Voges then took control of the innings, marshalling three key partnerships that allowed Australia to add 192 runs for their last four wickets.

He put on 52 for the seventh wicket with Mitchell Johnson who made 20 and 43 for the ninth wicket with Nathan Lyon who hit 22. The most vital of the three partnerships, however, was the last wicket one with Josh Hazlewood, with the pair adding an invaluable 97 to break the Windies spirits.

Hazlewood, in his fourth Test, struck a career-best 39 off 87 balls with five fours and a six, before finally being dismissed 40 minutes after tea, when he missed a straight one from Samuels and was bowled.

All told, Voges faced 247 balls and counted 13 fours and one six – a mighty blow over long-on off fast bowler Jerome Taylor which took him to 98. He then gathered two singles to also become the oldest batsman to score a century on debut.

He survived chances on 57 to Jermaine Blackwood at mid-wicket off Samuels just after lunch and was dropped again on 104 when Hope failed to hang on to one at gully off Taylor, with tea approaching.

His effort was required after West Indies started the day brightly through Bishoo, to put Australia on the backfoot from early.

The wily Guyanese proved the Windies trump card, picking up the wickets of Steve Smith for 25, Shane Watson for 11 and wicketkeeper Brad Haddin for eight.

Resuming on 85 for three, Australia lost Smith in the eighth over of the morning after the right-hander had added eight to his overnight 17. He danced down the wicket to Bishoo, missed his stroke and was neatly stumped by wicketkeeper Denesh Ramdin at 97 for four.

Bishoo then snaffled Watson in his next over, getting the right-hander to drive at a leg-break and nick a low catch to Jason Holder at second slip.

And the right-armer had his third wicket when he got a leg-break to rip past Haddin’s defence and hit off-stump as the batsman played back and was beaten.

Voges and Johnson saw Australia to lunch safely and extended their partnership afterward, with Voges reaching his half-century by pulling Samuels to the square boundary in the third over.

With both batsmen showing urgency, Johnson eventually perished, scooping Bishoo to Samuels at short fine leg, in the sixth over after lunch at 178 for seven.

Two balls later in the same over with no runs added, the left-handed Mitchell Starc missed a heave at Bishoo and was bowled through the gate.

However, Voges found a willing ally in Lyon whose innings consumed 50 deliveries and included three fours, and helped swing the game Australia’s way.

He lasted until the fifth over after the drinks break when he was trapped lbw by fast bowler Shannon Gabriel, off the first ball of a new spell.

Any hopes West Indies had, however, of quickly wrapping up the Aussie innings were quickly dashed as Voges expertly controlled the innings with support from Hazlewood.

Behind by 170 runs on first innings, West Indies started shakily. Hope was given out lbw off the second ball of the second over from left-arm seamer Starc, only to be reprieved by DRS.

He made little of his luck though and fended the final ball of the fifth over from Johnson to second slip where captain Michael Clarke took a fine low, diving catch, moving across in front of first slip.

Brathwaite then followed off the very next delivery – the first ball of the next over from Starc – playing all around an in-swinger and having his stumps rattled.