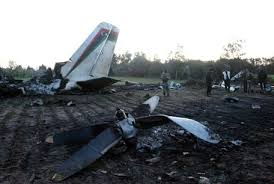 (CNN) — A Libyan military plane crashed in Tunisia’s Nabeul province Friday, killing all 11 people on board, the Libyan government said.

The plane was carrying five crew members, a doctor, three patients and two others who were accompanying them on the flight, Libyan officials said.

The Libyan air force said an engine caught fire as the plane made a gradual descent into Tunis Carthage airport and the pilot tried to land it before reaching the airport.

Libya’s culture minister, speaking on behalf of the government, confirmed the death of all 11 on board and also said an initial investigation indicated one of the engines was on fire, leading the whole plane to catch fire and crash.

A plane is being sent to bring the bodies of the victims home, the minister said in a post on the official Twitter account of Libya’s interim government.

The director of Libya’s civil aviation authority has been dispatched to Tunis to coordinate the investigation with Tunisian authorities, he said.

“We express our condolences to victims’ families and hope investigations will reveal reasons behind the crash,” he tweeted.

The Libyan aircraft came down about 60 kilometers (37 miles) from the capital, Tunis, near the town of Grombalia, Tunisian state news agency TAP reported.

Army units, a military medical team and civil protection workers were sent to the scene of the crash, the news agency said.

The plane was an Antonov An-26, which was flying from Mitiga Airport in Libya, TAP said.

Libyan officials said the plane, part of the country’s air force, was used as an air ambulance to transport patients inside and outside of Libya.

Many Libyans are sent outside the country for treatment because of the poor state of health care in Libya. Libya borders Tunisia to the east.