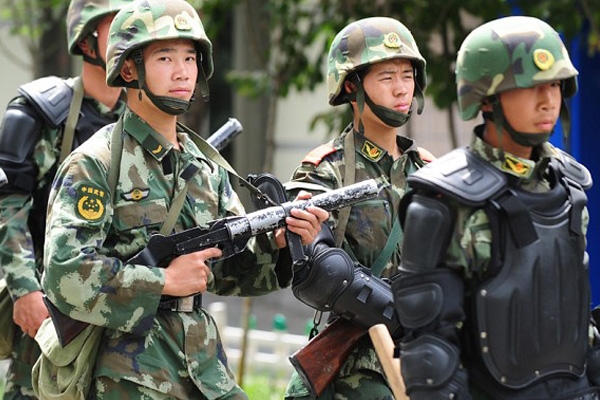 Three police officers were also injured, when the attackers crashed a truck laden with explosives into a security building in Yecheng County and detonated them.

The dead were all attackers; the police officers suffered minor injuries, Xinhua reported.

Xinjiang is home to many Uyghurs, a Turkic Muslim ethnic group.

The region is plagued by violent attacks, which Chinese authorities say has its roots in Islamic extremism.

Other critics, including exiled Uyghur activists, have attributed the rise of violence in Xinjiang to Beijing’s increasingly repressive rule there — a claim the government strongly denies.

In the region’s deadliest violent incident in recent history, a suicide bombing last month killed 39 people at a street market in the city of Urumqi. Another apparent suicide bombing left three dead in April at an Urumqi train station.

In March, 29 people were stabbed to death by alleged Uyghur separatists at a train station in the southwestern city of Kunming.

The Chinese government has responded by launching a massive anti-terrorism campaign as well as pouring more economic resources into Xinjiang.