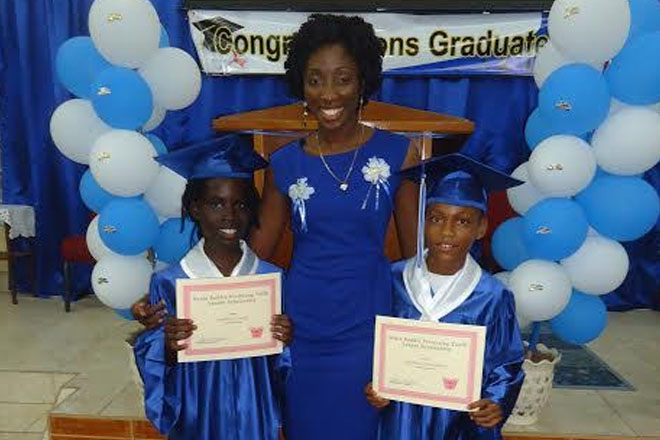 Basseterre, St. Kitts — Caricom Youth Ambassador, Ms. Sonia Boddie has continued on her quest to empower the nation’s children and young people, and has once again awarded the Sonia Boddie Promising Youth Leader Scholarship, to two very deserving students of the Edgar T. Morris Primary School in Tabernacle village. The 2015 awardees are Juniqua Carey and Azamba Alexander. They both have earned themselves a one day shopping trip with Ms. Boddie, to purchase $500.00 EC dollars’ worth of school supplies each.

Before presenting the awards, which were distributed at the graduation ceremony of the Edgar T. Morris Primary School on Wednesday July 8th, Ms. Boddie gave brief remarks and provided words of encouragement to students, parents, well-wishers and the members of the community alike. Ms. Boddie highlighted that it was always a pleasure to return to her hometown of Tabernacle and give back, because in her words, “The Tabernacle Primary School (now renamed the Edgar T. Morris) and the village of Tabernacle have raised me up, to be more than I can be”.

She also used the opportunity to remind the parents and guardians that education is expensive, and that they should always try to capitalize on any opportunity that is available, to help defray the cost of their child’s educational advancement. She lamented on the fact that there were eight (8) graduates of the school this year, but that she however only received five (5) scholarship application forms. She indicated that in that regard, she was a bit disheartened, as she would have wanted every child graduating to have a “fair chance” to have been selected. She also emphasized how important it is for scholarship forms to be fully and properly completed, noting that she had the benefit of studying all across the globe through scholarships, and had she not ensured that the forms were properly completed, she would have missed out on those opportunities.

Ms. Boddie further advised the gathering that “Opportunity is missed by most people, because it is dressed in overalls and looks like work,” citing a quote from the late American inventor and businessman Thomas Edison. She ended her brief address, by stating that the village of Tabernacle has produced outstanding citizens and that it was evident there was a wealth of talent to be exploited there in Tabernacle. Ms. Boddie therefore encouraged the students to always remember the school’s motto, “There is no success without hard work” and counselled them to remain focus, positive, to stay away from idle company and to make wise choices, as they transition to secondary school. Lastly, she challenged the parents, guardians, teachers and members of the community to continue playing an active role in the children’s lives, noting that they are our nation’s children.

The Sonia Boddie Promising Youth Leader Scholarship which was first launched in 2014, is awarded to one male and one female student of the graduating class of the Edgar T. Morris School each year. These students must exhibit financial need, sound academic performance and leadership qualities. Launching the scholarship in 2014, Ms. Boddie informed she felt moved to do so, having been a beneficiary of several local, regional and international scholarships herself over the years, which contributed significantly to her academic, personal and professional development. In Ms. Boddie’s words, “I am happy when I receive, but I am even happier, when I can give back.”