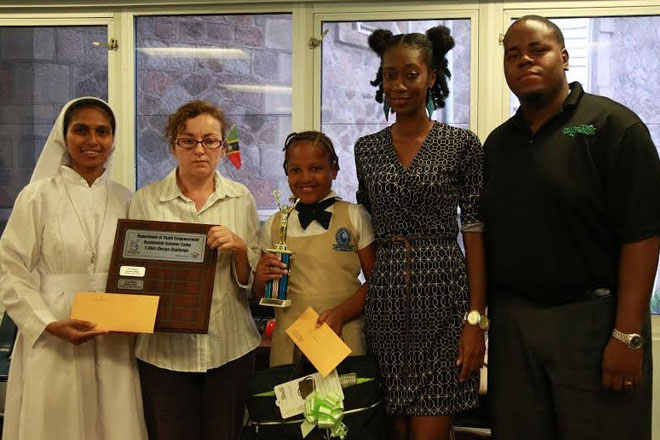 Basseterre, St. Kitts (SKNIS) — Eleven year-old Malyka Howell of the Immaculate Conception Catholic School won this year’s T-shirt Design Challenge with her depiction of the theme for the 2nd annual Youth Empowerment summer camp “A Safe Place to Grow for Me and You.”

The platform provides the youth of St. Kitts and Nevis an avenue to showcase their creative sides.

Suelika Creque, who spearheaded the competition, stated that the department is driven towards developing the talent of young people within the Federation.

“Moreover, those who show signs of creativity and artistic skills are encouraged to pursue their abilities and one of those ways are through our T-shirt design challenge,” stated Ms. Creque.

The challenge is a part of the annual residential summer camp where the winning design is displayed on over 300 camp T-shirts. Ms. Creque stated that this not only boosts self-esteem and motivates young people to pursue their dreams but the competition can also help them in future endeavours.

“Imagine that when a child becomes an adult and is seeking employment, perhaps in the artistic field, he or she will have this accolade to show,” she noted.

Over a two-week period, judges deliberated on 60 designs to select the one that most depicted the theme for this year’s summer camp.

Malyka won a Samasung 15-inch laptop fully loaded with design software and graphic tablet, sponsored by Cashwiz and a trophy. Her school received a plaque that will be rotated throughout the years bearing the names of the winners and schools. This was sponsored by Horsfords Group of Companies.

She also recieved a cash prize sponsored by Sakoda Scapa, two sessions with graphic design company Quite Vivid to learn the ins and outs of graphic designing, free summer camp submission and a gift voucher compliments of TDC.

First runner-up was Kishawn Jones of the Verchilds High School who received a gift voucher compliments TDC and two design sessions with Quite Vivid.

Other runners-up included Xeria Jacobs of the Beach Allen Primary School, Sabrina Narain of the Tucker Clarke Primary and Patricia Berridge of the Irish Town Primary who all received gift vouchers compliments TDC.