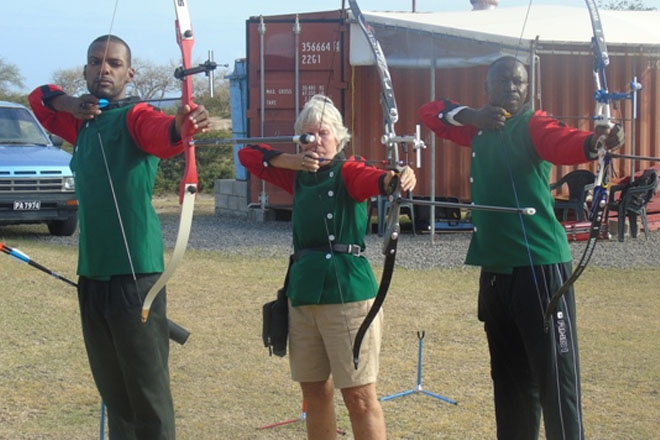 Sports Page — Four Archers out of Nevis will be representing the Federation in a prestigious Archery competition in Trinidad from June 4th to 7th.

The event which is referred to as the SOUTHERN CARIBBEAN ARCHERY CHAMPIONSHIPS, will be held at the Michael P Mackenzie Archery range in Chaguaramus.

The four Archers representing the Federation of St.Kitts and Nevis are: Dane Sandiford-captain; Pamela Barry; Catherine Joseph and Edmund Blackett.

Sandiford will be competing in all possible categories but the others will compete in the 18 meters competitions for their specific age group and gender requirements.

The Archers, except for Catherine Joseph who was unavoidably absent, spoke to NTV 8 sports on Thursday 28th May.

They were all cautiously optimistic about their chances and were careful to express the fact that the Archery Association on Nevis was only established in 2013 and that they were limited in experience. They all however promised to give of their best.

It was also pointed out that the four Archers are competing in the tournament at their own expense and having made much personal sacrifice. This includes an impressive uniform jacket, made in the colours of the national flag.

Sandiford pointed out that despite having written letters to the St.Kitts –Nevis Olympic Committee, they have not been formally accepted to be a part of the Association, which would effectively entitle his Association to certain benefits, including the covering of travel costs etc.

He is however hoping that by participating in the event in Trinidad, that his Association will receive necessary exposure and be able to eventually get the required recognition and acceptance.

The team departs the Federation on June 3rd.