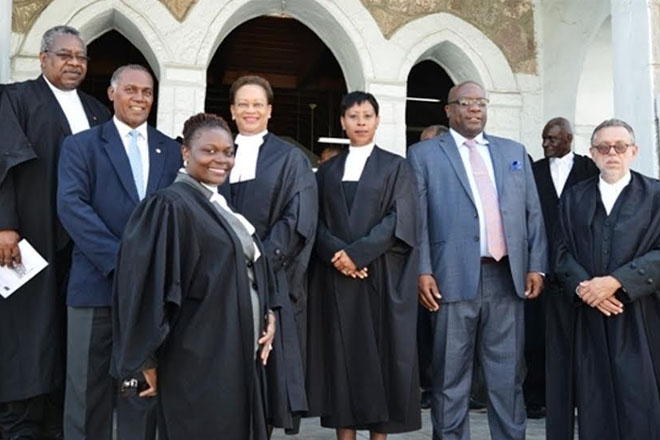 Basseterre, St. Kitts (SKNIS): Legal representatives from across the Federation were given assurances of continued support from the Government of St. Kitts and Nevis as it seeks to uphold the integrity of the judicial system and ensure it functions as a strong, impartial and independent body, during the launch of the start of the new law year 2015-2016 held in Nevis last Thursday (September 17th).

Honourable Vincent Byron, Attorney General, assured all present of the Government’s intentions as it relates to the court.

“We pledge to continue to lend support in whatever way possible to give assurance to the court in terms of the resources necessary to discharge its functions,” said the Attorney General. “We commit ourselves to enable the court to improve its efficiency. We will ensure that the court is equipped both in terms of human resources and other support mechanisms.”

He stated that the opening of the new law year “gives the holder of the Office of the Attorney General and the Ministry of Justice and Legal Affairs the opportunity to address the judiciary and members of the Bar, the legal fraternity and the administration of justice.”

“Our people look forward to the court for justice, whether in a criminal or civil matter or in a constitutional matter where the rights of the citizenry or some fundamental issue may be at stake,” he said, adding that his administration will be the vanguard of justice for all. “For the citizens who have lost loved ones to the savagery of criminals, we promise justice. For those threatened for participating in the judicial process in any form, we promise that we would use resources of the state to pursue justice, for justice is what makes for a civilized and a democratic society to work.”

Attorney General Byron stated that technological innovation will continue to play an important part of the next year, in a number of areas, in order to improve on the efficiency and effectiveness in the discharge of the Government’s obligations to the citizens. This he said would be done in the form of the introduction, implementation and enhancement of every network and document management systems to the high court registries, as well as the Attorney General’s Chambers and the Ministry of Justice and Legal Affairs.

The opening of the new law year was attended by His Excellency S. W. Tapley Seaton, Governor General, Dr. the Honourable Timothy Harris, Prime Minister of St. Kitts and Nevis, Honourable Vance Amory, Premier of Nevis, judges, lawyers, magistrates and other distinguished members of the inner and outer bar, as well as other guests.