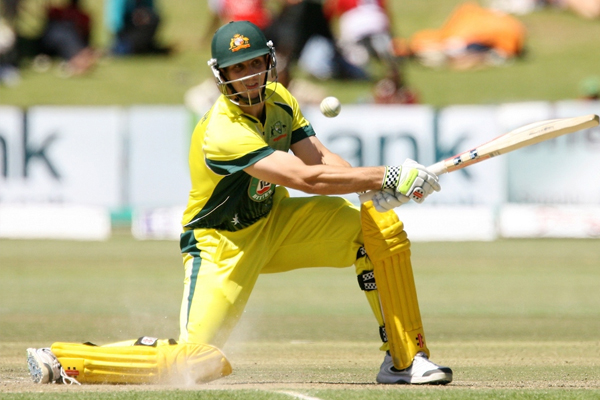 Sports Page — Mitchell Marsh almost single-handedly took Australia into the tri-series final, first by plundering 86 off 51 balls, including 21 off a single Dale Steyn over, and then with two wickets to dent South Africa’s chase. The bonus-point victory has guaranteed Australia spot in Saturday’s showdown but put South Africa’s in some danger. If they lose to Zimbabwe by a massive margin, so much so that the hosts gain a bonus point and improve the net run-rate, South Africa could be on an early flight home.

Marsh’s blitz injected life into an Australian innings that was solid at the start but became stuck through the middle periods against a stranglehold of spin. He shared in a 71-run stand with Brad Haddin for the sixth wicket, which included taking 60 runs off five overs from the 44th over, as South Africa struggled for a death-bowling option. Those runs ultimately proved the difference between the two sides on a scruffy, sluggish surface on which run-scoring was laboured.

Less than a week after they gunned down a target of 328 against Australia, South Africa stumbled in search of a significantly smaller target. Only Faf du Plessis had some measure of what was required and only he managed a score more than 24. Du Plessis’ second ODI century came six days after his first, but in much more trying circumstances because he lacked support.

South Africa’s middle-order was untested thus far but in their first stern examination were exposed against pace and pressure, as they have been in the past. JP Duminy, David Miller and to a lesser extend Ryan McLaren left South Africa’s long tail with too much to do and threw the spotlight on whether they were a batsman light or whether their bowling was what them down.

For nine-tenths of their time in the field, South Africa operated with discipline, from the opening passages where JP Duminy shared the new ball with Steyn, during the Phillip Hughes-Steven Smith stand of 85 for the second wicket and through the batting Power play in which they conceded only 20 runs and took two wickets.

South Africa’s specialist spinners, Imran Tahir and Aaron Phangiso, gave away just 81 runs in 20 overs and contributed to a boundary drought that had the rope being breached just once in 10 overs. They limited Hughes and Smith to collecting runs judiciously rather than freely and only Hughes’ sprightly start ensured his half-century was achieved at almost a run a ball, off 51 deliveries. They also snaffled three wickets to leave Australia in danger of a posting a total below 250.