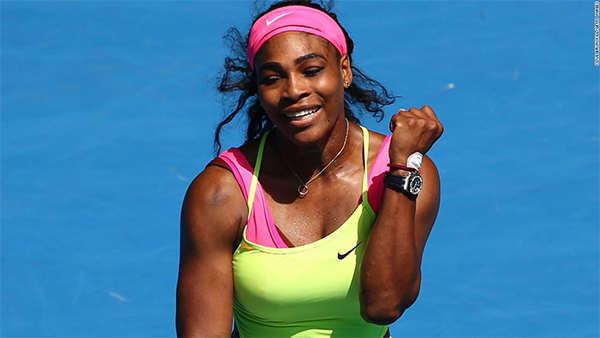 CNN — Serena Williams thumped Dominika Cibulkova 6-2 6-2 Wednesday to make it past the quarterfinals at the Australian Open — and that spells trouble for her rivals who are still in contention at the season’s first major.

The world No. 1 has never lost in Melbourne when she’s played a semifinal or final — going 10-0 — with her record overall in grand slam semifinals and finals an impressive 40-7.

Further not since the 2011 U.S. Open has the 33-year-old fallen in a grand slam semifinal or final.

Those are indeed ominous numbers for her semifinal opponent and fellow American Madison Keys, who prevented an all-Williams encounter in the last four when she edged Venus Williams 6-3 4-6 6-4. Keys became the third young, surprise semifinalist at the Australian Open in three seasons, joining Eugenie Bouchard and Sloane Stephens.

But Serena Williams wasn’t looking too far ahead just yet

The 18-time grand slam winner was simply happy to advance to the semifinals, having not done so in Melbourne since capturing the title in 2010.

“It’s finally good to get past the quarterfinals or the fourth round,” she said. “I forgot what it’s like for this place, for Melbourne, to look a little empty. Gosh, it’s been so long.”

She progressed over 2014 finalist Cibulkova despite continuing to struggle with a sore throat.

“I’ve been sick the past few days,” she said. “It’s just getting worse and worse. But hopefully it will start getting better