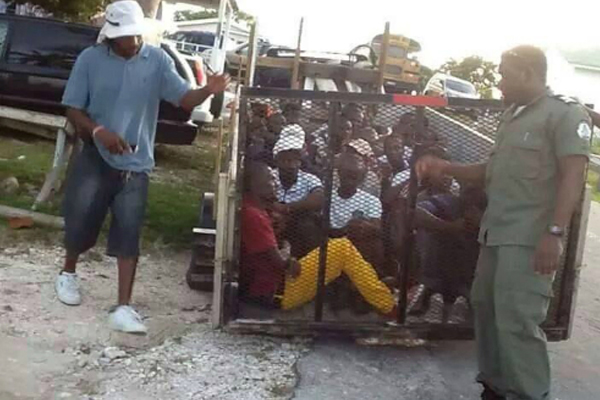 Nassau, Bahamas (CMC) — Bahamian authorities have described as a “false and malicious construction of events,” a photo showing a number of migrants being herded into a cage like “cattle”.

The Department of Immigration said it had taken note of the photo of migrants being held at Exuma and circulated on social media sites earlier this week.

“The construction being given to this photo by those who are seeking to sabotage the policy of the Department is that somehow the migrants were being mistreated and being held in inhumane conditions. That is a false and malicious construction of events. The photo and comments appear designed to defame the Department.”

President of the Grand Bahamas Human Rights Association (GBHRA), Fred Smith, said that since the launch of the government’s immigration policy on November 1, Foreign Affairs and Immigration Affairs Minister Fred Mitchell has insisted that the authorities do not treat illegal migrants as “cattle”.

He said in light of the recently-surfaced image showing suspected illegal immigrants penned in a mobile enclosure more suited to the transportation of livestock than human beings, the GBHRA is demanding that the minister gives “a satisfactory explanation of the behavior of public servants under his charge.

“Responding to the many cases of physical battery, wrongful detention and unlawful tactics which have arisen over the last two months, not to mention the recent rape allegation against a senior Immigration official, Mitchell’s stance has been that the Bahamas government does not condone the abuse of detainees.

“This is a calculated and cynical dodge. The fact is, as minister he is responsible for the Department of Immigration, its employees and their actions. In all such cases, the buck stops with Mitchell. His excuses are simply not good enough.”

Smith said that the “photo itself stands as a powerful example of the kind of unconstitutional, inhumane and degrading treatment of individuals – who are innocent until proven guilty under the law – which has stained the soul of The Bahamas for decades. Mitchell’s harsh new policy has only exacerbated this shameful trend”.

But in a statement, the Department of Immigration said that “the people in the photo were sitting on the back of a flatbed transport or trailer with an open end at the back of the trailer secured by a removable metal tailgate.

“The trailer was used to ferry the individuals from where they landed in Exuma to the holding facility the E C McKenzie auditorium in Ramsay, Exuma. The migrants were held at that auditorium overnight until they were transported by the Royal Bahamas Defence Force to Nassau.

“The journey from the landing point in Exuma would normally take thirty to forty minutes. At no time was any person under the care or supervision of the Department of Immigration kept in inhumane conditions,” the Department said.

The GBHRA says it is in the process of collecting testimonials of Bahamians of Haitian descent in particular, “who tell of unusual and unwarranted scrutiny by National Insurance Board (NIB) officials, illegal fees levied for the treatment of children in the public healthcare system, and denial of access to a public school, to name just a few cases”.

The GBHRA said it was calling on Mitchell to answer the various questions being raised regarding the new policy, failing which it wanted Prime Minister Perry Christie “to relieve him of the immigration portfolio, and bestow it upon someone with the foresight and clarity of thought to see where this disastrous policy threatens to take us”.