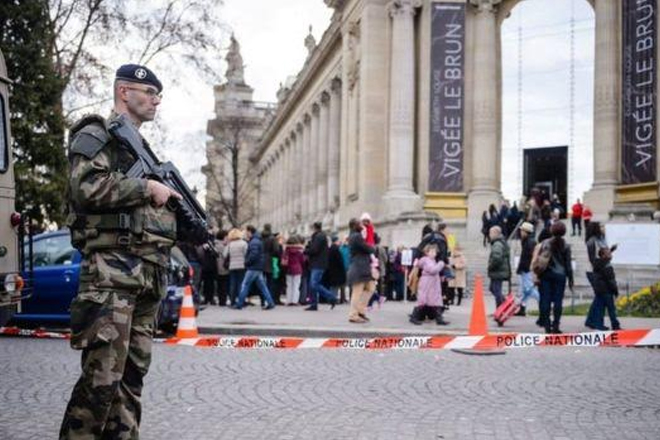 (BBC) Police in Brussels have detained a further six people in connection with an alleged plot to target the city on New Year’s Eve, prosecutors say.

Cities around the world have heightened security measures as New Year celebrations get under way.

Belgian police detained the six during raids at seven locations in and around the capital on Thursday morning. Two men were arrested earlier in the week.

The city’s main fireworks display has been cancelled over the feared plot.

The two men arrested in Brussels a few days ago, named as 30-year-old Said S and 27-year-old Mohammed K, both Belgian nationals, can be held for another month, a judge ruled on Thursday.

The two are both members of a motorcycle club called the Kamikaze Riders, according to Belgian media. It has been alleged that some members of the club are supporters of so-called Islamic State.

It is not clear whether the six individuals taken in for questioning on Thursday morning are also connected to the motorcycle club.

Separately, Belgian police arrested a tenth suspect over the 13 November Paris attacks, in which 130 people were killed.

Authorities say the apparent plots to target New Year celebrations are not related to the suspected network behind the Paris attacks.

Security is being stepped up in other major European cities ahead of New Year celebrations, including Paris, London, Berlin and Moscow, with officials wary of possible terror plots.

Meanwhile in Turkey, security services say they have thwarted a major plot to attack celebrations in Ankara.

Earlier this week, Austrian police claimed a “friendly intelligence service” had tipped them off that major European capitals were at risk of being attacked over the holiday period.

Belgian Prime Minister Charles Michel said the decision to cancel Brussels’ New Year festivities had been taken “given information we have received”.

Last year 100,000 people turned out in Brussels to welcome in the New Year. “In these circumstances, we can’t check everyone,” Brussels Mayor Yvan Mayeur said.

Brussels was put on a far-reaching lockdown in November in the wake of the Paris attacks, as police hunted suspects linked to the city.

An escalation of the perceived terror threat to the maximum level four led to the metro network being suspended and a curfew imposed for four days.

Belgium remains on high alert but the threat level has been downgraded to three. Restrictions in place over the New Year relate to specific events and celebrations.

The French capital has also cancelled its main New Year fireworks display but the traditional gathering on the Champs-Elysees will take place, amid tight security.

Projections on the Arc de Triomphe will be shorter than normal and four giant screens will be placed at intervals to avoid creating tightly packed crowds.

On Wednesday, Turkish police arrested two suspected IS members over an alleged plot to attack celebrations in Ankara.

Security will also be stepped up in Istanbul, with local media reports saying that some officers will be wearing Father Christmas outfits and other disguises to patrol crowds undetected.

Security is also being tightened in cities where the authorities say there is no specific intelligence about a possible attack.

Authorities in Moscow will completely close off Red Square, where crowds normally count down to midnight.