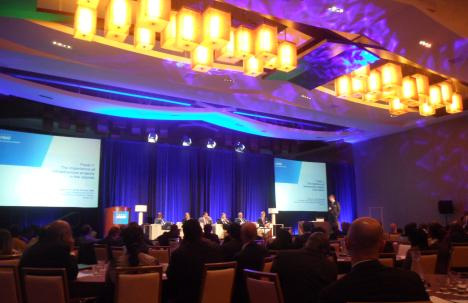 Miami, USA — Infrastructure development financing was one of the hottest topics at a gathering of Caribbean leaders recently in Miami, Florida.

During the three-day summit, regional ministers highlighted various projects that are in different stages of development. Projects in Jamaica, Puerto Rico, The Bahamas and Panama illustrated some of the larger developments in the region.

However, the wider Caribbean region is vast and distances between thinly populated islands can overwhelm some of the best intentions of large project developers.

By one estimate, at least $8 billion of several projects are in the pipeline that are likely to finish in the next three years.

But, the region needs more financing to complete projects that provide services and energy to local residents and create higher paying jobs.

Roberto R. Roy, Minister of Canal Affairs of Panama, gained a lot of attention as he reviewed the canal expansion project that has got worldwide attention.

“We are celebrating the 100th anniversary of the Panama Canal,” Roy noted at the conference.

The Panama Canal is being expanded at a cost of $4 billion and the government is on schedule to open the canal for larger and wider vessels as early as 2015 with the third set of locks in place.

The last canal improvement project was completed in 1914, before a US project that started in 1939 but was later abandoned in 1942.

The Baha Mar resort project, with 2,200 rooms and four hotels, is located in New Providence, Bahamas, and is scheduled to open in December 2014 at a total cost of $3.5 billion.

Chinese government-controlled banks are financing most of the project and construction is led by state-controlled Chinese companies.

Puerto Rico, despite the government’s current fiscal problems, is going ahead with its metro rail expansion that is initially estimated to cost $400 million.

The rail project, the only one in Caribbean, will first expand to the east and later will take on additional work and expand south.

However, challenges abound in many of the large projects in Caribbean.

Bahamas completed the successful Atlantis project and Panama is on its way to completing the expansion of canal system locks but other countries have not been successful in completing large projects.

However, water filtration, sewage processing, energy generation and distribution and other projects have not been successful in attracting financing in the region.

Large pension funds in the US and Canada have shown no interest in funding Caribbean infrastructure projects, according to several panel participants at the conference.

The reluctance to invest in Caribbean is partly driven by the project completion cycle that typically stretches ten to fifteen years but many governments in the region last only five years.

Investors are also reluctant to invest in large projects in the region because many of these projects are so called “green field” projects and have no clear exit plans for most investors.

Most pension funds in the US are willing to look at “brown field” projects that are nearing completion but are not ready to invest in multi-billion dollar projects from the start.

As a result, more capital is chasing fewer and fewer tourism-linked projects that rarely create lasting high paying jobs in the region.

In addition, these projects only increase the dependence on tourism in the region.

However, China has been willing to invest more capital in the region, as long the island governments allow the use of Chinese labour and construction companies to develop and build these projects.