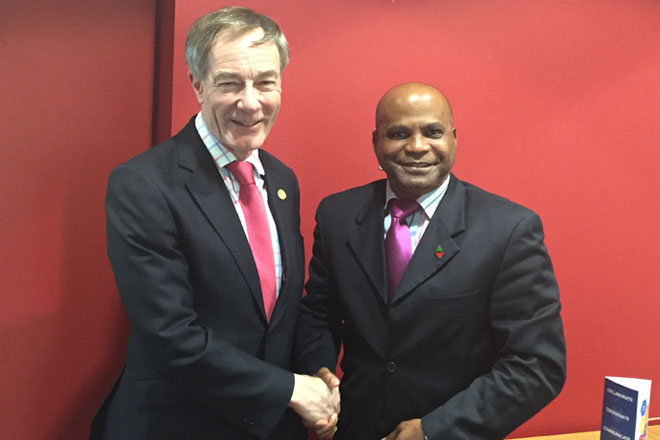 Basseterre St. Kitts — Coming on the heels of a series of meetings with European cruise lines, Minister of Tourism, Honourable Lindsay F.P. Grant, today announced 33 calls to St. Kitts from ships of the Carnival UK Group cruise lines during the next two years.

From the 27th of April to the 1st of May 2015, Minister Grant led a delegation of local cruise stakeholders on sales calls with cruise decision makers in Europe, which also included meeting with Carnival UK Group’s Chairman of the Board of Directors, David Dingle and Steven Young, Carnival UK Group’s Director of Port Services and Government Affairs.

Mr. Young confirmed to Minister Grant that the Carnival UK Group had committed seven ships to visit St. Kitts during the 2015-16 and the 2016-17 seasons. The ships are the Azura, Queen Mary 2, Britannia, Adonia, Arcadia, Ventura and the Oceana, which together will make a total of 33 calls to St. Kitts during that period.

“I will continue to personally meet with cruise executives to increase business to St. Kitts,” Minister Grant said. “These visits are critical and essential to maintaining current cruise line relationships and developing further business. We will continue to use these visits to get feedback on our current operations and plans for growing the cruise sector.”

The 2014/2015 will end with one million passengers expected to have arrived, making St. Kitts one of the Caribbean’s leading cruise destination.