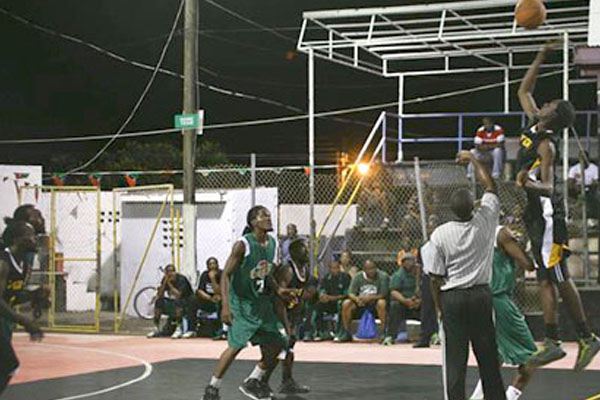 Both clubs easily handled their opponent with very little work. Cotton Ground made relatively easy work of the 3rd seeded Rams Hitters with a 90 to 74 drubbing of the former multi time SKABA Champions. Led by Sharp shooter Everson Webbe, Cotton Ground dominated their Kittitian Opponents on their home court at the Grell Hull Stevens Complex in Charlestown. The Hitters was led by Daryl Lewis who had 22 points. The dominating performance by the Cotton Ground team has left some to wonder if the Hitters will be able to provide any level of competitiveness in the Final Four Series. Coach James Barman Hanley however had promised that his team will give a much better account of themselves in a Game 2 on Thursday October 16th at Basketball City.

In the 2nd Series It was very clear to see that the # 5 seeded club Cayon Lions was missing that next double digit scorer in the person of Giron (Big G) Browne. Browne is unavailable for the series along with veteran forward Jamone Isaac who is out with a back injury.

The Lions are depending on the young phenomenon Livon Lee and team leader Tyrone O’loughlin along with the young legend Dave (Zenga) Pondt to put a dent in the Exodus’ undefeated reign and quest for a repeat championship. Despite some flashes of brilliance from Livon Lee and Zenga Pondt, Exodus still dominated Cayon leading the Lions from start to finish. The final score: Exodus 82 Lions 53.

Cayon Lions Captain Ty O’loughlin expressed some disappointment with the officiating of the game but promised that the Lions will come roaring back on Saturday October 18th and take game 2. Exodus will be without leader Shawn Forbes who was ejected and will have to serve an automatic one game suspension. This will no doubt provide a glimmer of hope for the Cayon Lions who will be hoping to force a game 3