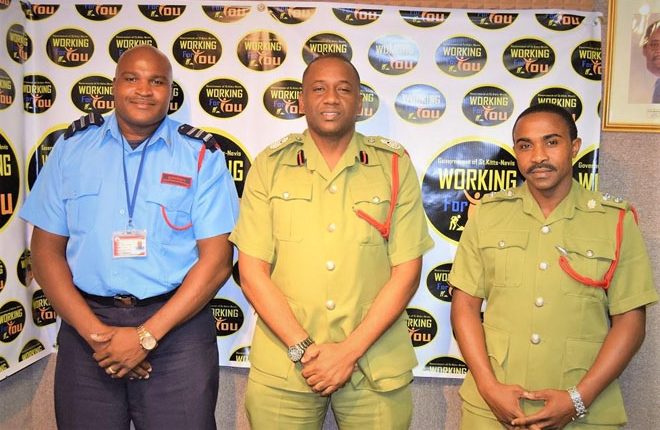 (SKNIS): Fire Station Officer, Garfield Hodge, and other officers of the St. Kitts and Nevis Fire and Rescue Services (SKNFRS), on an episode of “Working for You” on July, 12, encouraged residents and citizens to protect their homes and businesses with fire safety devices.

“We encourage parents, persons, everybody to get life saving devices,” said Mr. Hodge, as he mentioned that every house should have at least a fire extinguisher and smoke detector as means of fire prevention. He also cited that it is mandatory for business places to abide by proper fire codes and safety practices and that further legislation is being worked on for fire prevention.

“A fire incident is not isolated, it can happen to you,” stated Mr. Hodge, as he appealed to the general public to take fire prevention and safety education seriously.

Deputy Fire Chief, Abdias Samuel, added his support for getting life saving devices as he spoke about the cost for various devices that can save persons a great deal of money. He mentioned that the cost for a fire extinguisher is about EC$365.00 and a smoke detector about US$20.00. “A simple extinguisher could save you from over four hundred thousand or four million dollars in damages,” he said.

“I have not seen one business place that has so many fire related prevention systems integrated into their buildings,” he stated. He also indicated that the Fire and Rescue Service work in collaboration with other local businesses such as the Labour Department, Insurance Companies, and the Department of Planning to ensure fire safety mechanisms are in place.

“Fire prevention is our greatest mandate,” said Mr. Samuel, as he explained that the majority of work that the department focuses on is centred on fire prevention. He added that educating the public on safety standards and fire prevention tools is necessary and a main task for the Fire and Rescue Services. “The best way for you to help yourself is to install fire detection mechanisms,” he said.