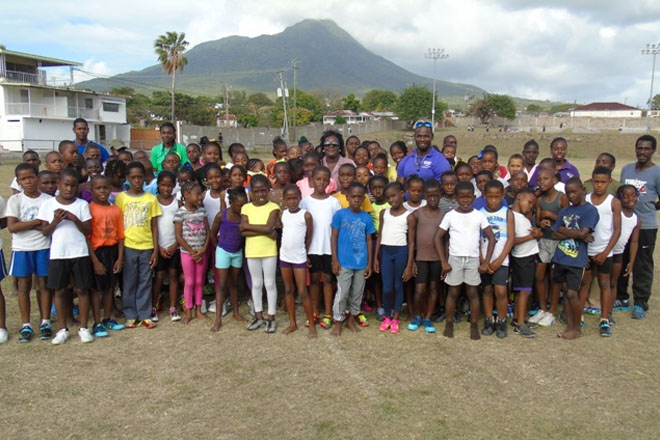 The meet was held on Saturday 2nd May at the prestigious KIM COLLINS stadium in St.Kitts and saw the top Primary school athletes from St.Kitts and Nevis, matching their skills.

Over 150 athletes from the Primary schools in St.Kitts and Nevis participated in the event.

Among those speaking at the brief opening ceremony that preceded the meet, was the President of the St.Kitts Teachers’ Union, Ron Collins who referred to the event as a celebration of friendship.

Also delivering remarks was the Junior Minister of Sports in the Nevis Island Administration, Hon Hazel Brandy-Williams who noted that persons always wondered when there would be an inter island interprimary championships.

‘It’s here now and it’s here to stay,’ she stated.

Minister of Sports in the Federal cabinet, Hon Shawn Richards declared meet open. ‘It will be a day of successes and failures; a day for making memories and demonstrating sportsmanship,’ he said in his remarks.

In the final analysis, team St.Kitts, representing the St.Kitts Teachers’ Union, won quite handsomely. The medal count was as follows:

Two of the outstanding performers for the Nevis Teachers’ Union team were:

The top athletes were as follows:

In speaking to the media, a few days after the event, Coach Wallace lamented the fact that the Nevisian athletes do not have a top track to practise on but indicated that even though their performance was not as good as what he saw at the Nevis Inter primary event, that he knew they gave it their all.

He also noted that some of the Nevisian spectators were pretty close to the action as the athletes competed and made very critical remarks which probably intimidated the athletes.

He is of the view that next year’s event should be held in Nevis and is looking forward to the day when Nevis will boast of an all weather track for the local athletes.

He congratulated the winning St.Kitts team but noted that his athletes could only get better for the experience.