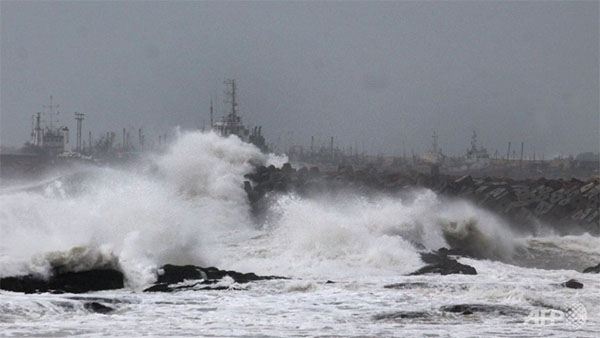 The weather system battered the port city of Visakhapatnam on Sunday with winds of up to 205 kilometers per hour, killing six people across two states, causing widespread damage and forcing the evacuation of 350 000 residents.

While the BCCI is yet to make a formal announcement regarding the game, BCCI joint secretary Anurag Thakur confirmed to cricket website, Cricinfo, that the contest at the ACA-VDCA Cricket Stadium would not go ahead.

“Due to extreme weather conditions, the BCCI has had to cancel the ODI. It is disappointing but we cannot overcome natural calamities,” Thakur said.

“Even though the host association was hopeful of staging the match if weather cleared, the BCCI didn’t want to take any risk.”

West Indies were due to travel to the Indian east coast on Sunday for the game but a team official confirmed to CMC Sports they have remained in Delhi along with hosts India. All flights to Visakhapatnam have been suspended.

Arrangements are now being made for both teams to travel to Dharamshala on Tuesday or Wednesday for the fourth ODI carded for the HPCA Stadium on Friday, the Windies team official also said.

The five-match series has been reduced to four games.

Gokaraju Gangaraju, secretary of the hosts association, Andhra Cricket Association secretary, had said Saturday they were hopeful the game could be played. He said the pitch and the entire outfield were already under covers, and all the necessary machinery was on standby to begin mopping up operations following the storm.

However, the Hudhud moved through the area Sunday with ferocity, leaving three dead in Andhra Pradesh and another three in Orissa.

The cyclone also felled trees, damaged crops and buildings, knocked out power and 75 per cent of the communication network in Andhra Pradesh, officials said.