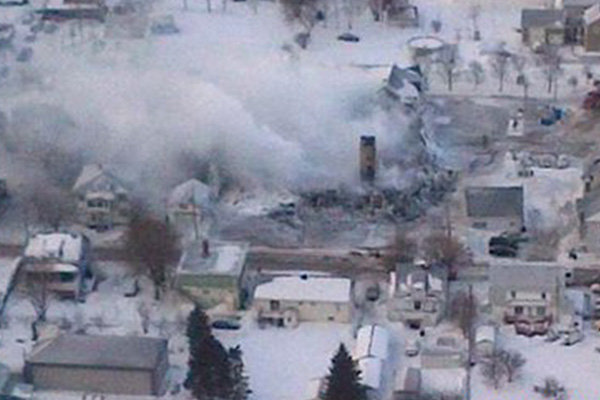 Deadly fire at Quebec home for the elderly

(BBC) — At least three people have died and 30 more are reported missing after a fire tore through an old people’s home in Quebec, according to media reports.

The building, which was home to about 50-60 people, was completely destroyed. At least nine people were injured.

Initial reports said 20 people had been rescued. Quebec Provincial Police Sgt Ann Mathieu said authorities were working to determine the exact number of victims and learn what caused the blaze.

Several fire departments from around the region were called to the town of 1,400 to help extinguish the fire.

As firefighters worked to stop the fire, they were also fighting temperatures of -19C (-2F) and blowing winds.

Mario Michaud, who lives across the street, told the local newspaper Info Dimanche he called emergency services after he saw smoke in the building.

“The fire had started on the second floor,” Mr Michaud said. “I saw the firefighters and they got to work. A woman on the second floor was shouting and she went out on to the balcony. Her son went to get a ladder but he couldn’t get to her. She burned to death.”

“We hope for the best,” Sgt Audrey-Annie Bilodeau said. “We hope that the number is going to go down.”