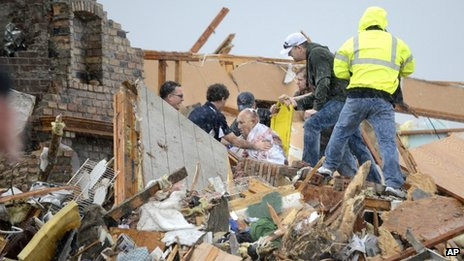 (BBC) Powerful tornadoes have swept through the US Midwest, destroying buildings and overturning vehicles in the states of Illinois, Indiana and Kentucky.

At least six people were killed, all in Illinois, and it is feared that several hundred people may have been injured in the fast-moving storms.

A number of people are feared trapped inside buildings.

Forecasters said people in 10 states had been at risk. Hailstones the size of tennis balls were reported.

The storm was so fast-moving – with winds of up to 111km/h (68mph) – that forecasters warned people not to wait until they saw the weather change.

It is continuing its way east.

November is ordinarily one of the quietest months in the tornado calendar, meaning these storms are unusually destructive for this time of year, the BBC’s Nick Bryant in New York reports.