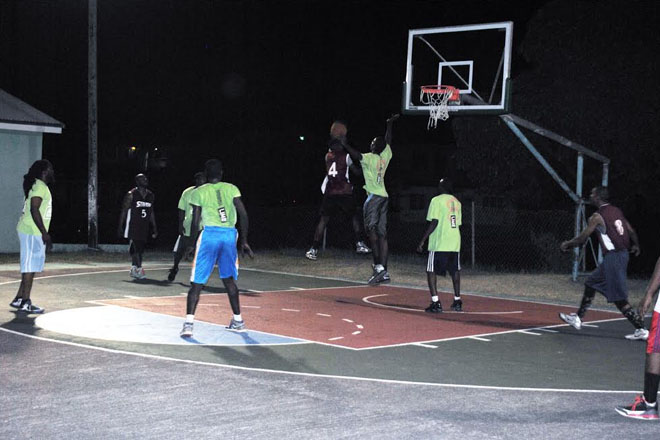 Basseterre, St. Kitts — The four teams going into the knockout stage of the exciting Development Bank Challengers Basketball League will be determined in the evening of Wednesday April 1, when the last two games of the league season will be played at the Challengers basketball hard courts.

The first of the two games will see Bad Boyz take on Hurricanes, while the second one will see Runners try their luck against the unbeaten Flawless Construction Lions.

There are three confirmed entrants to the last four, the first one being the unbeaten Flawless Construction Lions who have played six games, and will on Wednesday meet Runners. They will also pick up three points without stepping on the courts for their eighth game because one of the teams, Exodus Juniors, has thrown in the towel as it is occupied in the National SKABA Junior League.

The second confirmed entrant into the knockout stage are the Bad Boyz who have so far played seven games losing one, and will on Wednesday meet Hurricanes in a game they are expected to win given their record in the league where they have only lost to Flawless Construction Lions.

Heights, who have the services of a former national player and also former parliamentary representative for the area and government minister Glenn Phillip for them, are the third confirmed semi-finalists. They have played seven games winning four and losing three, and will pick up a win in what would have been their eighth game against Exodus Juniors.

In the league points standing after games played on Sunday March 29, Bad Boyz were ahead with 19 points from seven games. However, second placed Flawless Construction Lions with 18 points from 6 games will leap to the top as they will be awarded a win against Exodus Juniors who have opted out.

In games played on Sunday evening, March 29, Wolf Pack played their last game against Runners, whom their beat 51-43.

For Wolf Pack, Stanley Willet scored a total of 12 points, made seven rebounds, and two steals, while his team mates Ahamalie Dyer also scored 12 points and made two assists, and Esmond Andrews scored eight points and had two assists.

In the second game, Exodus Juniors played their last game in the league, the fifth, as they threw in the towel to concentrate on the National SKABA Junior League, giving away points to their opponents for the remaining three games. They were beaten by Bad Boyz 71-87.