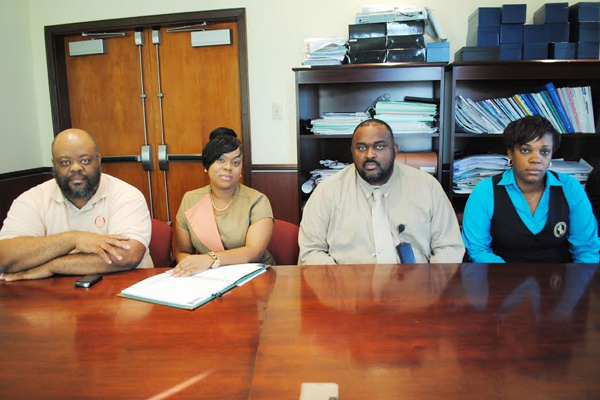 “We are very thrilled to have Development Bank on board because over the years, for the continuity of the team, it is always the players and villagers of Challengers who have to put their hands in the pocket and help the team in terms of getting jerseys, registration of the team, and anything that we do,” said a vividly euphoric Team Manager, Mr Roger Gumbs.

Challengers Exodus Basketball Club first played in the St. Kitts Amateur Basketball Association (SKABA) National League in 1990, but waited until 2011 when they won SKABA’s A Division and gained promotion to the Premier Division in 2012, where they placed second.

The team made a break in 2013 when they eventually won the Premier Division after they beat National Bank Bird Rock Up Riser in the final. In a back to back win, they repeated the feat in 2014 after they beat Nevis-based Cotton Ground Rebels in a thrilling final after an undefeated season both in the regular season and the playoffs.

“Challengers Exodus has been participating in the local league for 25 continuous years,” said Mr Gumbs, who was accompanied by Team Coach Mr Jamie Harrigan. “There has not been a year since 1990 that we have not participated. This year makes 25 years we are actually playing basketball in the national league, as Challengers Exodus, now Development Bank Challengers Exodus.”

Mr Gumbs, who made the remarks last week at the offices of the Development Bank of St. Kitts and Nevis, explained to the bank’s Manager of Human Resource, Marketing and Product Development Ms Danienne Brin that it was the first time that they would have gotten a sponsor that would have accorded them full financial backing.

“So we will be very, very grateful to Development Bank and we are willing to do anything that will help the bank to enhance their products and services, and we hope that this could be a very long relationship between Development Bank and Challengers Exodus Basketball Club,” said Mr Gumbs.

With the sponsorship that covers their activities for the year 2015, the first event will be the Development Bank Challengers Exodus Basketball League which balls off onSaturday February 7 at the Challengers hard courts.

“This is an out of season league sanctioned by SKABA,” explained Team Manager Gumbs. “We have some SKABA teams that would be playing but the Exodus team won’t be playing as a team down there. Some of them will be playing on separate local teams.

“There will be teams from Basseterre, teams from Sandy Point, teams from St. Pauls – all over. But Exodus itself would not be playing as a team. You probably will have three players in one team, another three in another and so on.”

After signing the sponsorship contract Development Bank’s Manager of Human Resource, Marketing and Product Development Ms Danienne Brin who was accompanied by her Support Officer, Mrs Vernitha Maynard, said that the bank was honoured to be partnering with the Challengers Exodus Basketball Club to develop the game directly, and the youth indirectly.

According to Ms Brin, there are many ways of engaging the Federation’s resourceful and vibrant youth to give them an opportunity to channel their energies into worthwhile activities that would not only build their self-esteem, but also the country on a whole.

“It was gratifying to hear the club’s Team Coach Mr Jamie Harrigan say that the game of basketball kept him out trouble when he was a young man growing up,” said Ms Brin. “We will work with your club to ensure that more young people follow his footsteps, as this can only redound to the overall benefit of our proud Federation.”

Team Coach Mr Jamie Harrigan, who is best known as Mr Exodus in his village of Challengers, said that his brother Mr Gareth Harrigan who now lives in Boston, USA, is the one who started the team in 1984 which was then known as Genesis. But after they started playing in the National League in 1990, the team was renamed Exodus as it was a team on the move.

Mr Harrigan pointed out that a number of players from the team have done national duty and recently two of its players – Mr Javal Hodge and Mr Ansel Revan – represented St. Kitts in the just recently held Leeward Islands Tournament in Montserrat. The two are also very good cricketers, and that Hodge plays for the St. Kitts Cricket team.

“We expect to win again this year, not that we are blowing our own trumpet but we feel that we have the right court guys, a lot of experienced guys, young and energetic guys,” summed up Team Manager, Mr Gumbs.

“The team is mixed well with youth and experience, and I think the advantage we have over other teams is that the guys just want to win, they have the will to win, they do not like to lose, and now we have Development Bank of St. Kitts and Nevis in our corner.”