BASSETERRE, ST. KITTS, April 27, 2019 (PLP PR Media Inc.) — The selfless and transparent actions by a senior civil servant who overlooked her own predicament following the passage of two category five hurricanes in 2017 to make sure others got government assistance have come in for high praise from Prime Minister, Dr the Hon Timothy Harris. 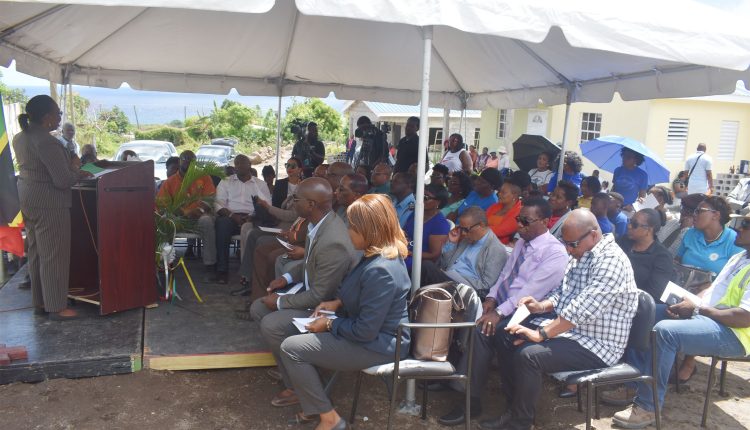 Acting Director of the Department of Social and Community Development, Mrs Mary Anne Wigley, addressing the house handing over ceremony at Stone Castle in Tabernacle.

“I am happy and I want to thank Mary Anne Wigley again, because in her work she cares and she looks after those who are unfortunate,” said Prime Minister Harris, who is also the Minister of Finance, Sustainable Development, National Security, People Empowerment, and Constituency Empowerment.

“Sometimes we forget that people like Mary Anne Wigley and others who are providing care and service they too are human beings, needing appreciation and love, needing encouragement as they take on the burden of others,” observed the Prime Minister. “She was out helping the process of transparency in the identification of those who had become victims of Hurricanes Irma and Maria. And while that was happening, she had also lost a roof to her house.”

Mrs Mary Anne Wigley is the acting Director of the Department of Social and Community Development, and Prime Minister made the remarks at Stone Castle in Tabernacle Village on Friday April 26 at a house handing over ceremony for Ms Winfred O’Loughlin whose original home was destroyed with the passage of the two hurricanes in September 2017.

“She was going out identifying other people, putting down the names of other people and her name was not on the list,” noted the Honourable Prime Minister. “Life is like that, and so Ann you are a national treasure and I shall ensure that for the next independence when we identify those special sons and daughters of the soil, Mary Ann Wigley’s name will be among them. She deserves a special place among our sons and daughters who we must honour. And so we make that promise.”

Prime Minister Harris explained that after Mrs Mary Anne Wigley saw the condition in which Ms Winfred O’Loughlin’s house was in, she (Wigley) observed that the situation did not help the dignity and self-esteem of the family. Mrs Wigley advised that the house did not need patchwork and that it needed to be ‘pushed down’ and a new one built.

With the technical expertise of Mr Kevin ‘Ninky’ Williams Director and owner of Creative Engineering and Construction Services Ltd, a former engineer with the Public Works Department who had overseen the rehabilitation of the Old Road Bay after the passage of the two hurricanes in 2017, it was felt that it would be too expensive to rebuild Ms O’Loughlin’s at its old site and a new site was sought in Stone Castle to build a new house.

“Today we have come on this good day to hand Winfred the keys to her home, and to wish that her days in her house will be long and prosperous and happy and peaceful,” said Prime Minister Harris. “And we are happy not only to present her with a new home: Thanks to the Team Unity Government we are happy to say that the house comes almost fully furnished thanks to the generosity of S.L. Horsford and TDC who have donated the furniture, the living room set, the dining room set, and the bedroom set to her house.”

The two corporate citizens were represented at the house handing over ceremony by Mr Dominic Matthew, and Mr MacMillan Gumbs for TDC; and Mrs Natalie Kelsick, and Mr Wallis Wilkin, for S.L. Horsford. According to Prime Minister Harris, “They are all here representing part of the public sector/private sector partnership that has become a feature of the good work, the inclusive work, of the Team Unity Administration.”