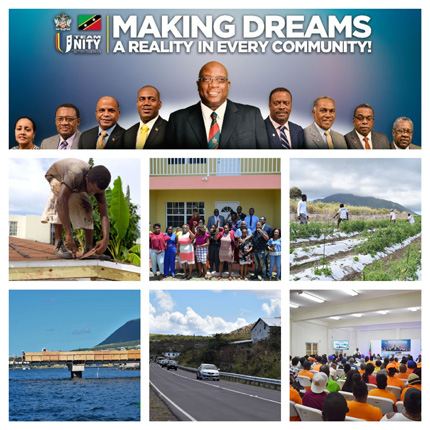 BASSETERRE, St. Kitts, April 03, 2019 (Press Unit in the Office of the Prime Minister) – At Tuesday’s (April 02) massive community consultation town hall meeting in East Basseterre, it was made clear that the Dr. the Honourable Timothy Harris-led Team Unity administration has stayed true to its word by delivering, in a short period of time, on most of its commitments made in its Manifesto of 2015.

These include several key policies that have since been actioned, such as the removal of VAT from food, medicine, educational supplies and funeral expenses; the introduction of a $500 monthly disbursement to households earning $3,000 or less per month; rebranding of PEP into the Skills Training Empowerment Programme (STEP); creation of 2000 new jobs; prompt payment of overdue $16 million gratuity owed to former sugar workers; launch of a massive housing solutions programme; reduce mortgage payments for NHC Houses, and lower student loan payments.

“The public commitments that we have made are being satisfied. What better example of good governance could you ask for?” Prime Minister Harris said to a packed hall at the Newtown Community Center.

The honourable prime minister noted however, that the deliverables of his Team Unity administration has gone beyond what was promised to the people in 2015.

As it relates to the Government’s comprehensive housing response in the country, Prime Minister Harris said, “Our roofing programme has helped over 2000 people; the NHC-introduced HELP programme assisted 450 persons; we introduced a government employee mortgage programme – 153 persons; we introduced a programme to assist first time homeowners with exemptions and that has assisted, since we got in, near 400 persons. We have surpassed the promises made.”

One individual in attendance at Tuesday night’s town hall meeting, identified as social and political contributor, popularly known as Mr. Culture, praised the government’s response to the needs of the people following the passage of the 2017 hurricanes.

“The government never had this roof repairing [programme] on the manifesto. It came from the insight of the Prime Minister and his team [who recognized] that there are people in the Federation who need help and cannot help themselves, and so they brought forth this roof [repair] programme,” Mr. Culture said.

The Team Unity Government has also undertaken several critical capital projects including the $69 million island main road rehabilitation project and the construction of the US$48 million second cruise pier at Port Zante.