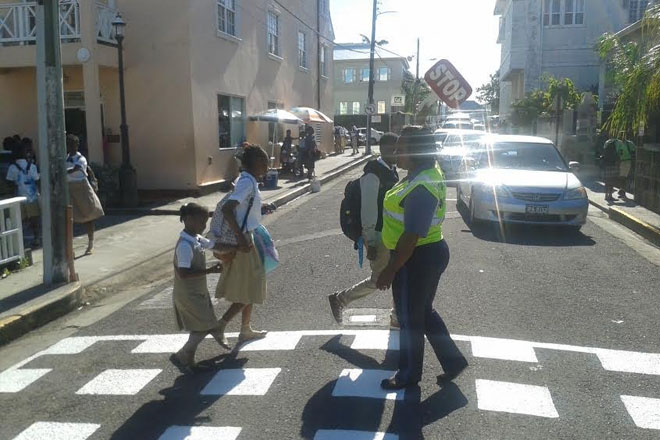 Drivers encouraged to be more alert as School Re-Opens

Basseterre, St. Kitts (RSCNPF) — “Be Alert” was the caution given by members of the traffic enforcement and safety department within the Royal St. Christopher and Nevis Police Force to motorist on Monday (September 7th) as they patrolled the roads on the start of the new school term in St. Kitts and Nevis.

According to the Head of the Traffic Department Inspector Carl Caines, officers were out and about on Monday reminding motorists that schools had reopened and to be alert. Inspector Caines stated that they used the interaction to remind drivers of the traffic laws with regards to pedestrians. “Motorist were reminded to slow down in school zones and drivers should keep a safe distance from school buses and other vehicles that have stopped in close proximity to pedestrian crossings,” said Inspector Caines.

He cautioned that drivers should look out for crossing guards in school zones, and they should obey all posted signs within the area. He stressed, “Instructions given by crossing guards must be complied with to ensure the safety of pedestrians.”

Parents, he said, should reiterate to their children, not to play in the streets while walking to and from school, to look both ways before crossing the street, and to listen to the instructions of crossing guards when present.

The traffic Head said, “Incidents between drivers and students have been rare, but all it takes, is one un-attentive driver on a cellphone or engaged in some other distraction, or a student not paying attention on the roads for an incident to happen. If both parties are alert, the risk goes down, and all would be well,” he said.”