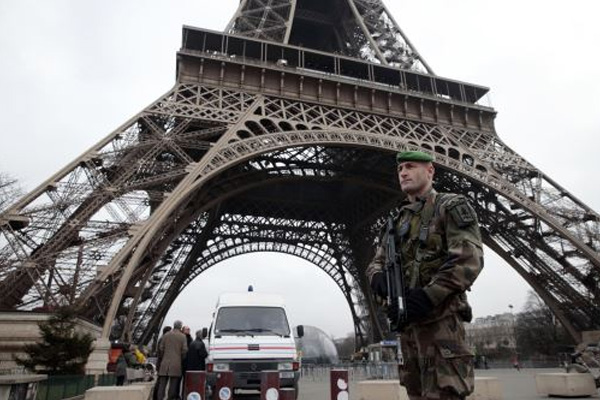 Paris, France (AFP) — France’s iconic Eiffel Tower is to go dark late Thursday in a sombre tribute to the 12 people killed in the attack on the Paris satirical newspaper Charlie Hebdo.

The lights normally illuminating the 324-metre (1,063-foot) tall monument at night will go out at 8:00 pm, according to the office of Paris Mayor Anne Hidalgo.

The extinction of the lights will happen as a demonstration expected to gather thousands will be in full swing on the other side of the city, in Republique square for the second night running.

Other events will be held in the French capital over coming days to mark the outrage over Wednesday’s attack on Charlie Hebdo, and to assert the right to freedom of expression — a value France has long cherished and sought to protect.

“Our city has been a refuge for writers, philosophers, journalists who were threatened for their ideas,” Hidalgo told Liberation newspaper. “There is no place in Paris for extremist ideas of any sort.”

The Eiffel Tower is one of France’s top tourist attractions and the pre-eminent monument in the City of Light.