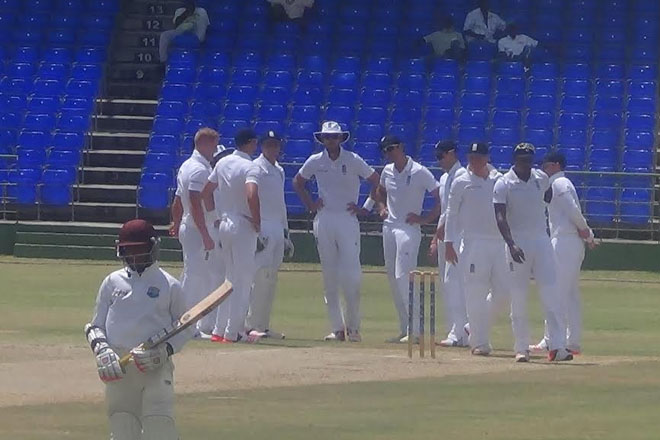 England in charge at end of Day One

Sports Page — The touring English team was large and in charge at the end of the first day’s play versus a St.Kitts Invitational X1.

The two day encounter commenced on Monday 6th April and will be completed on Tuesday 7th April. It will serve as one of two practice matches for the tourists to be played at Warner Park.

The St.Kitts Invitational team won the toss and Captain Jaques Taylor elected to bat on what looked like the usual placid Warner Park track.

However, James Anderson, Ben Stokes, Chris Broad and Chris Jordan generated fair pace and disconcerting bounce which had the batmen in early trouble.

Sherwin Peters was the first to go, caught at the wicket; then Nevisian Ross Powell, after playing an exquisite cover drive for four, which brought the receptive crowd to its feet, was then caught at slip off the very next ball.

The dismissals of Shane Jeffers and Steve Liburd can only be termed as ‘soft dismissals’ and Akeem Saunders after a glorious cover drive, went the very next ball, squared up by a short ball from Chris Jordan.

Jason Peters played an enterprising and entertaining hand but his extravagance got the better of him as he tried to hoik Broad back over his head, only to see the ball go high into the air for wicket keeper Butler to take a diving catch.

The catch of the day however, was a one handed beauty taken by Tredwell at slip, after initially going the wrong way, to gift Jacques Taylor with a long duck.

The St.Kitts Invitational X1 succumbed for a pitiful 59 all out.

When the English men batted, they did not have the slightest bother as Captain Alastair Cook and the recalled Jonathan Trott racked up half centuries.

Trott perished before the close, caught by Ross Powell off the bowling of Steve Liburd.

End of day one