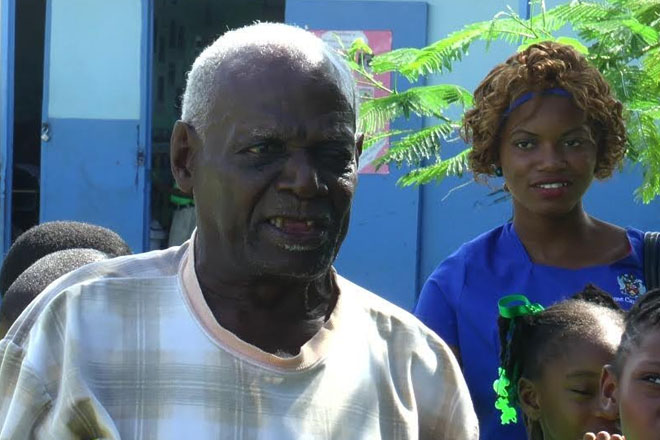 Experiences of Past Showcase the Development of SKN

Basseterre, St. Kitts (SKNIS) — The evidence of the advancement of the Federation and pride in one’s heritage are but two of the positive outcomes that are expected from the sharing of experiences by senior citizens with students throughout St. Kitts and Nevis during the Month of Older Persons.

October, which is reserved for the commemoration of lives of Older Persons internationally, has seen seniors in the Federation going into the schools and giving insight into the days of their youth, via the coordination of the Ministry of Social Development.

One such experience was given by Leonard Hanley who interacted with students at the Tucker Clarke Primary School, on Monday (October 12th). He recalled that he attended the Basseterre Boys School and upon reaching the highest grade he went to work in the cane field before relocating to the sugar factory. In due course, Mr. Hanley said that he left that occupation to fill a vacancy at the Public Health Department as a drain cleaner. He said that his superior said that he was too young for that job and said he could do better working on the garbage collection truck.

“I worked there for a long time, for 50 years,” Mr. Hanley said, noting that it was not considered a very prestigious job. “But it was a bread I was getting [I was making a living]. “There was no discrimination in working – as long as you are working for a honest bread.”

Mr. Hanley said that he was promoted in that line of work and became a supervisor among the sanitation workers. He said that he had many challenges but he was always firm and carried out his job as expected. The development of the Federation and advancement in sanitation could also be observed in the methods used for the collection of waste material.

“In those days, the type of truck they were using [old fashioned], they [residents] used to dump their stuff [garbage] on the street, to the side of the road,” Mr. Hanley explained. “It’s not like today; the young men have modern trucks that come around. Now each household has a drum in the yard. It was not like that in those days, and we had to work in that condition.”

He explained that as time went by, he saw modern trucks being purchased that ensured greater safety for garbage collectors.

Activities which have already taken place in commemoration of the Month of Older Persons include the message opening the month by Minister of State with responsibility for Social Development, a Church Service, the adopt an older person programme and senior citizens movie day. Upcoming events include visits by parliamentary representatives, a tea party and hat parade as well as the annual parade from the tamarind tree in Greenlands.