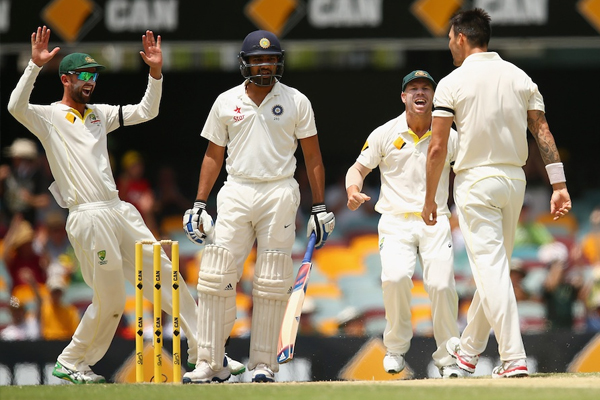 Sports Page — Australian resilience was writ large across a four-wicket victory over India that will look a little fortunate in the scorebook without reference to the dressing-room scenes on day one, when India seemed set fair for a mighty first innings and Mitchell Marsh, Mitchell Starc and Josh Hazlewood were all either lost to injury or weakened by fatigue.

Hazlewood’s recovery from full-body cramps to prise out India on the second morning set-up the match, and the combined efforts of the new captain Steven Smith, Mitchell Johnson, Chris Rogers, Starc and Nathan Lyon ultimately allowed the hosts to overwhelm India by a greater margin than the first Test in Adelaide. For Smith it was a significant triumph, emerging victorious after a first day he described among the toughest he had ever endured, as either player or captain.

MS Dhoni’s men were adequately placed to fight their corner when day four began, but they crumbled in the face of concerted pace and pressure from Johnson on a pitch that had begun to deteriorate. Only Shikhar Dhawan, who did not walk out to bat at 10am because he had been struck on the wrist in the practice nets, offered any sustained resistance, and his dismissal lbw to Lyon after lunch heralded a swift end to India’s innings. They had never recovered from Johnson’s burst in the morning session.